Case Study: Chicago Board of Trade 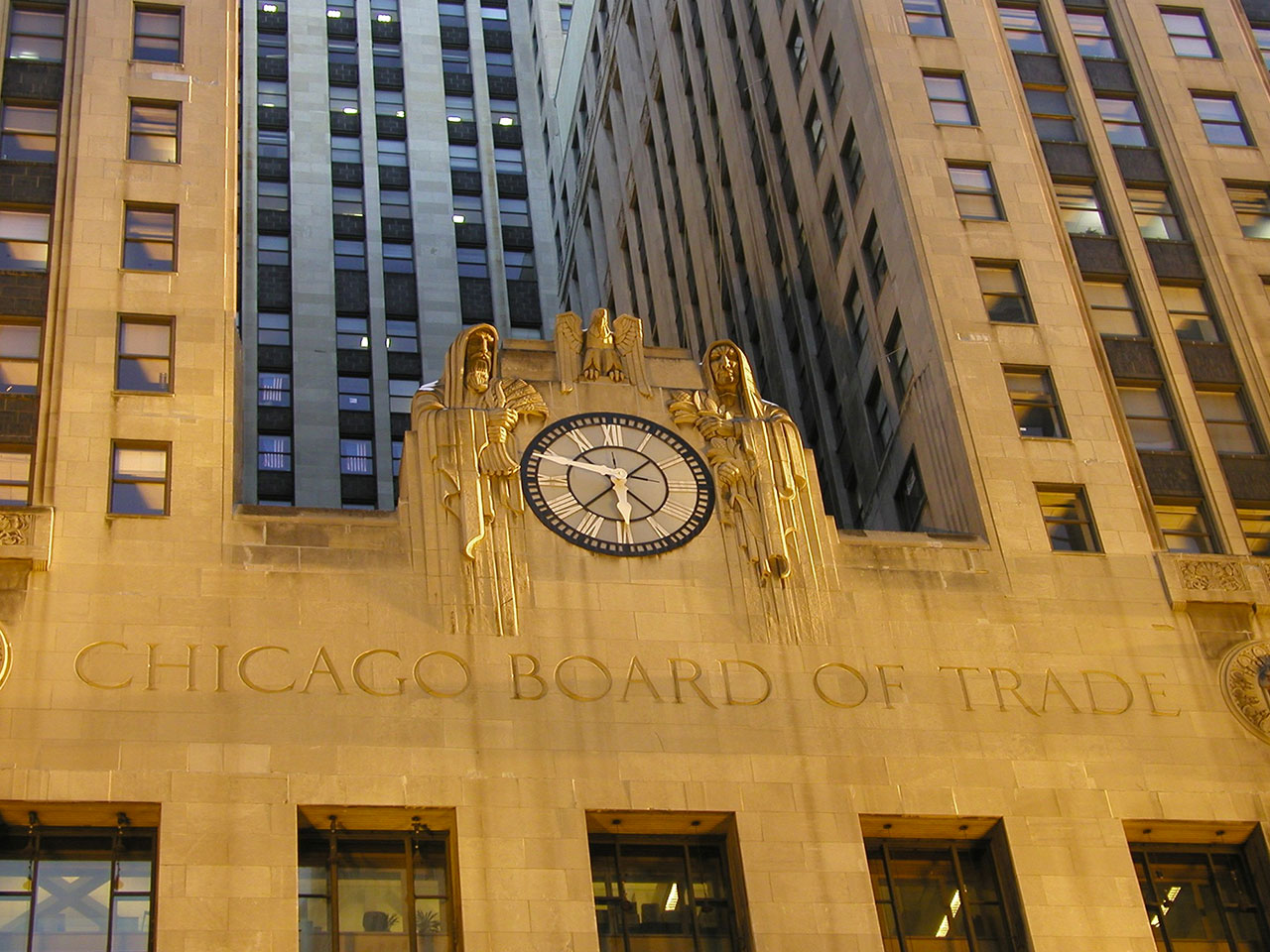 Located in the famous Loop commercial center, the 600-foot-tall Chicago Board of Trade Building (CBOT) houses the world’s oldest futures and options exchange. Until recently, the building also housed a pair of aging built-up systems that were beginning to worry management. Due to their location, replacing these systems would be a virtually impossible task. But a difficult retrofit job was greatly simplified by the modular design of FANWALL TECHNOLOGY by HUNTAIR. Despite limited access to the mechanical room, there was no need to knock down walls or make other significant structural changes.

Designated a National Historic Landmark, the 45-story CBOT Building is an Art Deco structure consisting of two towers. For many years, the air-handling system—including two large supply fans and two return fans—provided airflow for floors 10 to 23 in each tower. Installed in 1970, these old air handlers were becoming a cause for concern at CBOT. Maintenance costs were increasing; moreover, building owners wanted to ensure uninterrupted HVAC service to traders and tenants. The modular design of FANWALL systems provided the ideal fan replacement solution by removing access barriers to the existing air handlers located in two mechanical rooms on the 24th floor of the CBOT building.

Deciding to replace the old coils and fan systems may have been easy, but carrying out the task posed unique challenges for the general contractor, Alps Construction and the mechanical contracting firm, Competitive Piping Systems Inc. (CPS), Chicago. “The age of the building, the location of the equipment in the building, the need to keep the old system operational with a single weekend cut-over, and access were the most unique items about the retrofit,” said Adam Smith, project manager, Alps Construction. The initial problem centered on how to move equipment to and from two mechanical rooms that house the air handlers, which are located on the 24th floor. The only access to those rooms is through a door that leads into tenant office space where electronic trading and other important activities take place.

The contractors knew they had to find another way to get men and equipment into and out of the mechanical rooms during the project. They developed a different route, one that lead into the mechanical room through a small exterior opening cut to the outside and then down to a subroof on the 23rd floor.

The difficulties involved in moving equipment via this route played a big role in the choice of new airhandling equipment. The original plan was to replace the old units with something similar, but given the access limitations, that idea no longer seemed feasible. “The original blowers were extremely large,” said Tom Muraski, vice president of Competitive Piping Systems. “In order to get something that size into the building, we would have had to take out walls. It would have been a massive undertaking.”

So instead of large conventional fans like the old ones, the team chose a modular fan system. A FANWALL® system consists of a number of individual cube-shaped cells, each of which houses a fan, motor and electrical connections. The number and configuration of these relatively compact cells depend on the application and its requirements. “The FANWALL components were of a manageable size to allow us to work around the existing equipment that remained in the penthouse and gain access through standard doors,” said Smith.

“We could bring the system up in small pieces and build everything onsite.”

FANWALL systems are customconfigured by specifying the number of fans, as well as fan operating speed (rpm) and wheel width and diameter. This allows each system to be optimized for maximum efficiency.

For this job, Environmental Systems Design, a global consulting engineering firm headquartered in Chicago, worked with Midwest Applied Solutions of Hillside, IL, the HUNTAIR manufacturer representative, to design two identical fan systems totaling 470,000 cubic feet per minute (cfm). Each system consists of a 130,000 cfm supply array made up of 21 FANWALL cells and a 105,000 cfm return array made up of 15 cells. The cells measure approximately 3 feet by 4 feet and weigh about 400 pounds.

Once the supply FANWALL systems were in place, CPS switched over power and ductwork to the new FANWALL array, which began functioning as the new supply system over the weekend. Finally, the contractor demolished the old supply fans and replaced them with a FANWALL® array for the exhaust system.

The entire job, which included installing new coils and dampers, took about three months. All system shutdowns and startups occurred during nights, weekends and holidays so that the project wouldn’t disrupt building operations during normal business hours.

In addition, the new airflow systems are equipped with a full complement of variable air volume (VAV) boxes that allow airflow control on each floor served by the systems. The old airhandling system did not include VAV boxes for all floors. On floors without VAV boxes, static pressure would build up at certain times of the year with no way to relieve it.

The identically sized fans and motors that make up a FANWALL array operate in parallel to create the same airflow rate (cfm) as a single, larger fan sized for the same duty. Due to this system redundancy, a fan/motor failure is only a high-priority maintenance issue rather than a mission-critical failure that disables the entire airhandling system.

If one fan motor fails during operation, the VFD and control system increase the speed of the other motors so overall system performance can be maintained at the same level until the failed motor is replaced. Losing one fan doesn’t noticeably affect the system’s operation.

Low-frequency rumble no longer an issue

In the mechanical rooms of the CBOT Building, small fans operating at relatively high speeds produce less of the particularly troublesome lowfrequency noise than lower-speed larger fans sized for the same airflow and static pressure. The modular fan design also benefits from careful attention to balance within each of the fan wheels, which significantly reduces vibration. Another key to noise reduction, a Coplanar Silencer® surrounds the fan and motor of each fan cube with acoustically absorbent material to greatly reduce airborne noise at the source.

For air handlers that are reaching the end of their service life, replacing existing fans and other components can be the most cost-effective solution for avoiding the cost and business disruption of an air handler failure. Access limitations are a barrier to many replacements because they cannot be accomplished without the time and expense of a major demolition and reconstruction project. FANWALL® systems can minimize these and other barriers.