The U.S. electric grid infrastructure is more than 100 years old and its strained capacity will fall short of tomorrow’s anticipated energy needs, according to Hayter.  Therefore, ASHRAE is petitioning manufacturers, engineers and other HVAC industry members to design more sustainable equipment and buildings that will put less load on the nation’s electric infrastructure. This will help transform the current one-way passive electric grid into a more active infrastructure that integrates Internet of Things (IoT), alternative energy and other technologies resulting in a goal of net zero and grid-interactive buildings. Hayter provided a synopsis of the aspiration’s progress to more than 500 ASHRAE members attending the annual President’s Luncheon held at the 2019 ASHRAE Winter Conference and AHR Expo–2019 last January where she outlined the association’s “Building Our New Energy Future; What Buildings Professionals Need to Know About Changes Coming to our Energy Sector” campaign.

Hayter, Nortek CEO Bruno Biasiotta and local engineering students and professors toured the 80,000-square-foot plant that opened last summer. The facility demonstrates the St. Louis-based NAS’ commitment to modernizing both manufacturing processes and the end-product copper coils used in its commercial HVAC products. ASHRAE hopes to educate building professionals and their clients on Distributed Energy Resources, because DSRs represent critical technologies and strategies through which buildings evolve from passive consumers to active partners with the grid, according to Hayter.

“I was impressed Nortek recognizes the industry’s coming changes and is offering itself as a resource, while also providing knowledge and leadership to the building industry as it looks forward to discover new solutions for energy use,” said Hayter, who is also a senior research advisor at the Department of Energy’s, National Renewable Energy Laboratory (NREL), Golden, Colo.

Connecting with ASHRAE Chapters, such as inviting the ASHRAE’s Central Oklahoma Chapter–Region VIII on the plant tour, is another facet of bringing the association’s campaign to the grassroots level, according to Hayter who visited five international and 13 North American chapters during her first year as president last year.

“Buildings, vehicles, IoT and alternative energy sources are converging to define a new energy future,” said Biasiotta. “Working with ASHRAE, Nortek is invested in being a part of the solution in creating well buildings with net zero impact.” 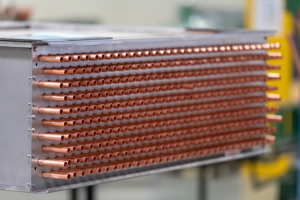 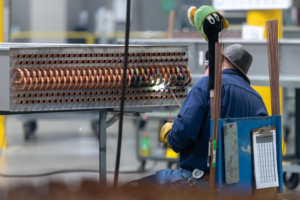 A coil assembly goes through the return bend brazing process. 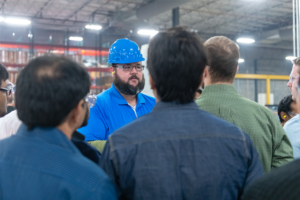 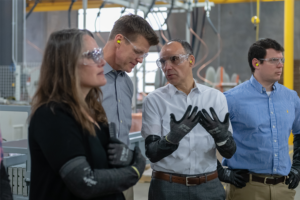 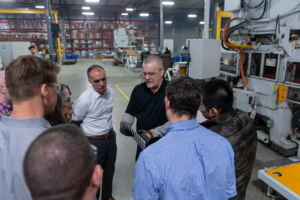 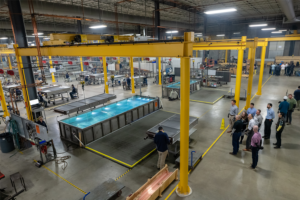 The team watches as a finished coil assembly is prepared to undergo comprehensive leak testing. 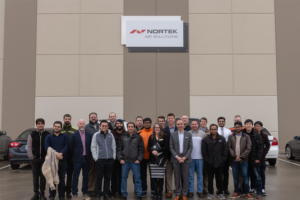 ASHRAE President Sheila Hayter joins the Oklahoma chapter of ASHRAE on a visit of the Nortek Air Solutions plant.