A major technology company made the decision to relocate a portion of its business from its current location in Venice, California to a new location in the Playa Vista tech hub neighborhood of Los Angeles, California.

To make a move to the new location, the company chose a 319,000 square foot airport hangar that was originally built in 1943 as its facility.

A stable, old existing structure was transformed into a large, usable office space location with updated interior and exterior features. The hangar contains a large amount of interior airspace. An air handler system customized to exact specifications was able to be implemented into the existing infrastructure without any needed modifications or increased design costs.

One of the World’s Most Technology Advanced Planned Communities

The Playa Vista neighborhood of Los Angeles, California, is a planned retail, residential and commercial community that incorporates environmentally-friendly green development. It features “a mix of affordable and luxury housing, office and commercial space and open spaces and recreational amenities, all set next to a restored wetlands and wildlife preserve.”

It has become a technology hub for a variety of businesses due to the proximity of its location and because of development opportunities that can provide less congested, larger office spaces that many companies are looking for. It is also a fully connected neighborhood with telecommunications and broadband capabilities.

Originally, Howard Hughes purchased the site and built a runway and aircraft factory with a large hangar structure and a variety of other buildings. This hangar, constructed entirely of wood, was used to build the Hughes H-4 Hercules aircraft. Nicknamed the “Spruce Goose”, it is a wooden prototype flying boat designed to transport cargo on nonstop flights across the oceans during WWII. It has the largest wingspan and tallest height of any aircraft in history. Only conducting one brief flight in 1947, the aircraft is on display at the Evergreen Aviation & Space Museum in McMinnville, Oregon.

Previously, before development, Playa Vista served as the headquarters for the Hughes Aircraft Company from 1941 to 1985.

The ”Spruce Goose” hangar is divided into four zones, or quadrants. Three zones provide tenant office space. The fourth zone, also tenant space, features recording studios and sound stages that are utilized by a streaming company and other recording companies. The hangar itself incorporates its original external structure along with its wide open internal space and framing infrastructure, including original interior wood aesthetics that have been refinished. Considered to be one of the largest allwooden structures in the entire world, at about 750 feet by 248 feet and 72 feet tall, it has been left in place to present day.

A major technology company made the decision to move part of its business from its current location in Venice, California to the Spruce Goose hanger in the Playa Vista neighborhood and make the hanger location its Los Angeles headquarters. To accommodate this move and convert the structure’s enormous 319,000 square foot area footprint into usable office space, a total of 19 Nortek Air Solutions air handlers were decided on to be implemented into the hangar’s existing frame infrastructure to provide roughly 640,000 CFM combined.

The internal framing structure of the hangar comprises of a “central spine” that runs straight down the middle of it. 14 of the Nortek Air Solutions air handler units were added directly to this central spine to serve the entire tenant space. These 14 units comprise of seven actual systems, with a portion of the units being dual tunnel with single common return. There are seven supply units built with an ITF on the second level and seven return units built with a WF to accommodate fan placement on the third level that either pull air and exhaust it or pull air that is then supplied to the air handler units.

The return units feature FANWALL TECHNOLOGY® which is installed in a vertical configuration.

Bringing It All Together - The Perfect Fit

Nortek Air Solutions was selected for a Basis of Design (BOD) due to being well-known for dependability and for having a proven track record of designing custom, superior air handling solutions. The BOD was spot on from the very beginning. and encompassed the entire scope of the project. Nortek Air Solutions met all the requirements, including an air handler system design that could manage a large volume of air in a very wide-open environment.

Nortek Air Solutions fit the air handler system components and parts right into place without any unneeded or costly modifications to either the system or the physical structure of the hanger. The result was hassle-free installation that accommodated unique configurations which conformed to the hangar infrastructure footprint requirements – tight constraints and size specifications.

It was the expertise of the scalable air handler system design which lead to such a massive amount of usable space being reclaimed. The design expertise of Nortek Air Solutions allowed the hangar space to be customized, thereby integrating the air handler equipment perfectly into the existing, updated hanger design. 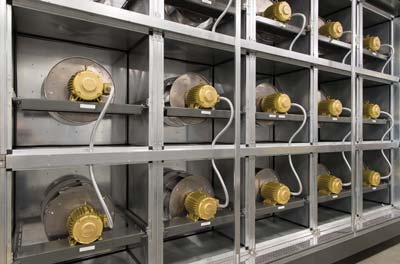 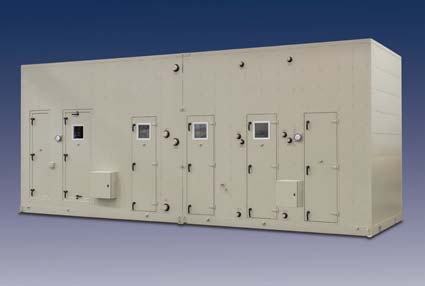