A high school in Battle Creek, Michigan, recently underwent a major transformation from an aging 1908 building to a facility that embodies the newest principles of educational design, including an HVAC plant with sparkling efficiency and flexibility. The facility upgrade was accomplished on a tight schedule that minimized disturbance to the educational mission.

The main high school serving the city is Battle Creek Central High School. As the name implies, the school is located in the heart of the city. The existing 250,000 sq. ft. facility included four connected buildings — the two largest dating back to 1908 and 1923. In 2007, the school district initiated a major project to build a facility that would meet current educational needs. The community was strongly attached to the grand old building and advocated that it not be simply knocked down and replaced.

The challenge of meeting the needs of a modern educational facility while retaining a historic structure was undertaken by TMP Architecture, Inc., a Michigan firm. The vision of the new facility was based on input from the school district and the community. The construction manager selected for the project was Skanska Schweitzer, in a joint venture.

The solution chosen was to retain as much of the existing building as possible and replicate the Neo-classic façade in the adjacent building. In this way the long history and traditions associated with the building could be continued. In addition, many interior walls, stairways and other architectural features were retained. The project also involved adding 160,800 square feet of educational space.

The renovated and expanded facility includes flexible learning spaces that have abundant natural light and are designed to allow collaborative learning. Administrative and guidance facilities are located in close proximity to the learning spaces, thereby dividing the large school into small communities.

One key to building energy efficiency was the selection of a distributed geothermal heating and cooling plant. Brian Runde with Peter Basso Associates was the HVAC system design engineer on the project. According to Runde, in his firm’s experience geothermal systems generally save 30% or more over other types of heating and cooling systems. Runde points out, “These systems are also relatively easy for the owner’s staff to maintain.”

According to Runde, the initial plan was to install either horizontal or “slinky” type geothermal loops. He says, “As we progressed with soil testing and soil borings, we found the site had abundant water available for a once-through system.” He notes that the calculated 1,000 ton peak building load requires 1,800 gpm of ground water at 51°F to keep the building loop between 40° and 80°F. The water is supplied by two, 12-inch diameter municipal-type wells, with one being redundant.

The well water is pumped to heat exchangers that isolate the ground water from the building’s closed loop system. Runde explains, “The ground water is then discharged into a storm sewer that runs a short distance to the Battle Creek River. All the required studies were performed and the needed permits from the Michigan Department of Environmental Quality were obtained.” He adds that the 1,800 gpm discharge does not affect the warm-water fishery of the Battle Creek River. “It provides a very efficient heating and cooling source for the building.”

The loop water is piped to 14 Energy Recovery System Air Handlers equipped with geothermal heating and cooling capabilities. Most of these units are located on the building rooftop and are placed near the building loads they serve. These units were supplied through Griffin International LLC, a leading supplier of a range of HVAC products and systems, headquartered in Chesterfield, Michigan.

According to Steven Bott, a principal at Griffin International, the company has worked with Peter Basso Associates in the past. He adds, “Venmar CES is well known to the engineers at Peter Basso for its high quality and the company’s ability to customize and meet specific needs for each project.” Bott coordinated the design requirements set by Brian Runde at Peter Basso Associates. He notes, “We had extensive coordination with the engineers at Venmar CES, ranging from the physical size of units to discussions on unit and system controls.”

All of the units have an integrated geothermal heat pump system served by the loop. These units are a custom design and range in size from 3,800 cfm to 34,000 cfm. Two of the largest units, 34,000 cfm and 28,000 cfm dedicated outdoor air units, are equipped with enthalpy wheels and eight stages of heating and cooling. According to Runde, the large air handling units were used in the design because of the need for a large volume of outdoor air for classroom ventilation. Another large unit is a custom 42,500 cfm dehumidification unit for the swimming pool. This unit has an aluminum flat plate heat exchanger and a heat pump with four stages of heating and cooling.

Tim Emmons from Griffin International was involved with contractor coordination on the project. Because of the need to meet a tight construction schedule, special coordination with Nortek Air Solutions was needed. Emmons states, “We had 12 big Venmar CES units that needed to be delivered to the project over a short period of time.” Emmons worked with Nortek Air Solutions and the contractor to stage delivery of these units over a four-day period.

A local crane yard was used to move the equipment to the job site and into place. Emmons notes, “This allowed the contractor to have control of what equipment he needed to set and in what order he wanted it. The crane operator was able to set most of the equipment on this site from just one crane location.”

Rick Mason is the department school facility director. Mason says, “The units are really running fine. We’ve had practically no problems with the coordination of the equipment with the school facility.” The units have now been through both heating and cooling season operation, and the owners are happy with their performance.

The on-site engineer for the school district is Bob Roth, and he echoes Mason’s comments. “You have a few little bugs with equipment startups, but nothing significant. These units are now up and running and carrying the school building’s heating and cooling requirements just as planned.”

Design engineer Brian Runde points out that the loop configuration of the design allows different units to be simultaneously heating and cooling different spaces. He explains, “Imagine a day in January when the sun is shining in windows on the south side of the building in a classroom full of kids. This space will require cooling. At the same time a classroom on the north side may require heating. The system will allow this to happen.”

Runde also notes that the geothermal system handles all of the heating and cooling required in the building. “There is no supplemental equipment installed. The building was disconnected from the central steam plant in the basement, which still remains to serve adjacent buildings owned by the school district.”

The geothermal system at Battle Creek Central High School demonstrates that geothermal is an exciting option for school districts looking to reduce energy usage and meet demanding new standards for building air quality. Further, the use of distributed air handlers, such as the Nortek Air Solutions Energy Recovery Systems, offers flexibility unimagined in the past. Even a 100-year-old facility can be brought to the cutting edge of HVAC design. 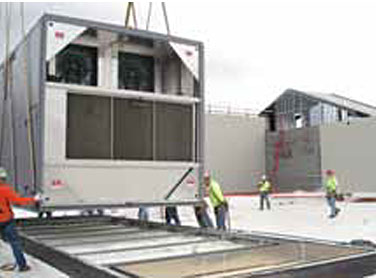 Installation of the Energy Recovery System fan and coil section on the insulated roof curbs. 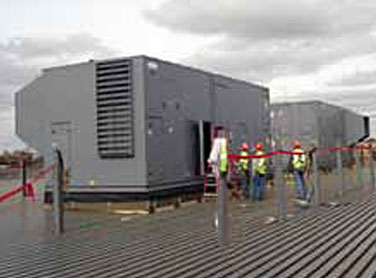 14 units were placed on the rooftop or interior mechanical rooms of the Battle Creek Central High School. 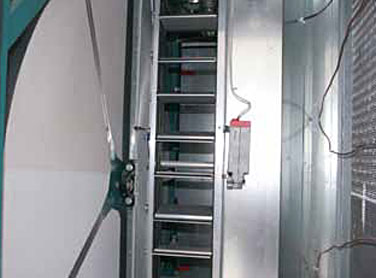 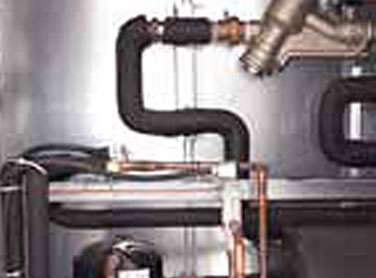 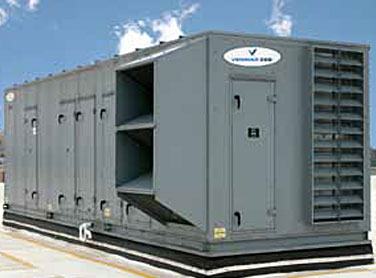