Frequent fan failures were resulting in occupant discomfort and loss of productivity for days at a time, and it was challenging to get spare parts to repair the fans.

The building owner wanted a reliable solution that would improve energy efficiency, could be installed quickly, and would work in the existing space.

Multiple modular fan FANWALL® arrays were used to replace the existing 40-year old fans in both the supply and return air side. Controls automatically monitor and implement the most efficient mode of operation to meet airflow requirements.

Replacing the heart of an air handling system in a commercial office building with better fan and control technologies can significantly reduce energy costs while dramatically improving equipment uptime. It also goes a long way to reduce maintenance costs and resolve nagging reliability challenges. This is the Blue Cross Blue Shield (BCBS) of Downtown Kansas City, MO story about how it took steps to improve office worker productivity by transforming its air handling systems. BCBS operates in an eight-story office building that is home to hundreds of employees and serves as the headquarters for Kansas City BCBS.

The building’s two air handlers feed a network of variable air volume (VAV) boxes. The system design practice of air handlers having one or two fans was a common approach in earlier decades. Here, the original air handlers were each designed to deliver 80,000 cfm of highly filtered 55°F air throughout the building’s ductwork, and room temperatures were regulated with the VAV boxes and radiant baseboard heat.

In this facility the owner faced two air handler challenges: frequent fan failures resulting in occupant discomfort for several days, and the availability of spare parts to repair the fans. For an office building built to provide a productive environment for hundreds of workers, these issues were a cause for action.

Don Layne, Operating Engineer with BCBS, commented, “The biggest challenges for us were increasing the reliability and redundancy of the system. We formerly had one supply fan and two return fans. If we were to lose the supply fan, we wouldn’t deliver air to the building. Now, with the FANWALL system, if we were to lose a fan motor, it is a scheduled maintenance item and not an emergency.”

Another problem BCBS faced was high electric energy costs due to the inefficiencies of the old fan system. All of the large fans were required to operate even during periods of light building occupancy and moderate outdoor temperatures.

“At some point, technology updates lead a facility to make a change in order to update and improve their system. Now was our time and a FANWALL system was our solution.”

Layne added, “It had been 38 years that the system operated using the original fans. At some point, technology updates lead a facility to make a change in order to update and improve their system. Now was our time and FANWALL was our solution.”

MMC Contractors engaged Mechanical Sales, a manufacturer’s representative with experienced HVAC professionals that work as solution experts. Marcus Malich from Mechanical Sales was closely involved with this project from the beginning. Before Malich joined the Mechanical Sales team, he worked at the Nortek Air Solutions brand Huntair®, where Malich help advance FANWALL TECHNOLOGY®  throughout the industry. His background made him an important asset in finding a solution for BCBS.

Transforming How They Move Air

The FANWALL cubes can be configured to fit any size air tunnel, often requiring up to 50 percent less installation space than vaneaxial fans, and without all of the sound attenuation devices. FANWALL cubes only take up about 3 feet in airway length, whether the application is 5,000 cfm or 500,000 cfm.

Malich points out the particular value of System Optimization Controls. “With SOC we can vary the speed of fans and turn off fans when not needed, which leaves the remaining fans operating near their peak efficiencies. There are tremendous energy savings in operating this way. Each of the motors has its own variable-frequency drive, so if one fan were to become disabled, the remaining fans can speed up to overcome the loss in airflow.”

It was understood that the ideal time to do the air handler changeover was in the winter, when cooling requirements were lower and the four existing fan units could be taken out, one at a time. The contractor selected to execute the project was MMC Contractors, a large mechanical contractor with offices in Kansas City, Houston, Omaha, Las Vegas, and New Jersey.

The FANWALL array retrofit work took place in December 2013 over a two-week window during the holiday. The actual time that was needed to demo the old equipment, rig the new equipment to the roof, install and start up the new FANWALL systems was an astonishing four days. This four-day window also included other air-tunnel upgrades.

During the first inspection at the BCBS site, the amperage draw of the original fan systems was measured. Amperages were again measured once the FANWALL retrofit was complete. The energy savings was on the order of a 26% kWH reduction.

Chris Willemssen, Retrofit Sales Manager for Nortek Air Solutions, stated “This was a pretty typical situation for a FANWALL retrofit opportunity. There were past failures that caused down-time plus there was relatively old, inefficient equipment still in place. That combination can make a powerful case for a retrofit project.”

Each supply array produces 80,000 cfm and each return array produces 80,000 cfm. SOC automatically monitors and implements the most efficient mode of operation to meet airflow requirements. The motor speed can be varied along with the number of enabled fans and motors at any given point in the operating range. In this way the optimum number of fans is operating at the optimum speed for all load requirements.

To allow efficient shutting down, individual fan cubes are fitted with FANWALL Backdraft Dampers (FBD). These prevent backflow of air through the idled cube, while the other cubes run. The FBD model also has a revolutionary blade profile that laminarizes incoming air and actually improves flow characteristics, resulting in a near-zero system effect.

“The ease of the modular design allowed us to mobilize much quicker and with less rigging time to help keep the estimate down.”

Tim Larson, Senior Sales Representative with MMC Contractors, shared his perspective on the retrofit as the installing contractor. “The ease of the modular design allowed us to mobilize much quicker and with less crane rigging time to help keep the estimate down. The small footprint and manageable weight of each fan module gave us flexibility in setting the array.”

“We had very little post start-up calibration needed with the optimized controls package and its internal logic control.” Larson added, “One of the challenges we overcame was educating the customer on the new controls strategy of the optimized fan control versus the traditional operation method.”

“The system has performed better than advertised and the savings are documented as real. The Mechanical Sales team was extremely accessible and willing to plug in early in the sales process. They are very supportive in the selection process and calculation of the ROI.” 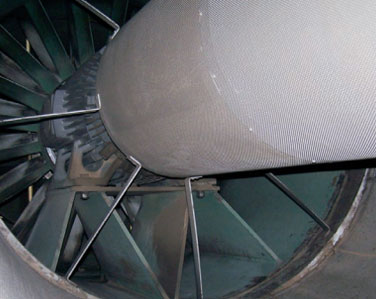 Example of an old vaneaxial fan, where components like the motor are difficult to service or replace. These fans often require lengthy sound attenuators to reduce fan sound. 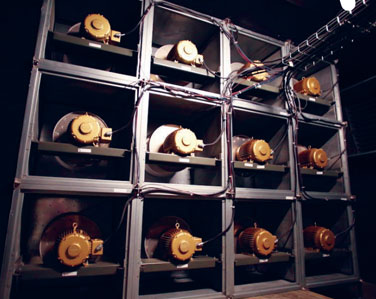 The supply FANWALL fan curve (left) shows the number of fans operating as the airflow demand reduces. The DDC System Optimization Controller (right) keeps the fans operating at their peak efficiencies as the system unloads, resulting in energy savings. 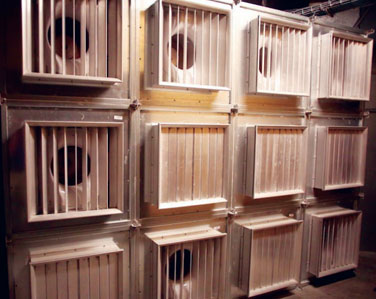 Motor control panel with 12 variable frequency drives, one for each fan. This panel also contains the System Optimization Controls.