The replacement fan systems needed to fit in the existing penthouse air handlers, and the installation needed to be as efficient as possible to minimize the impact of downtime.

Multiple FANWALL fan arrays were used to replace the vaneaxial fans. The modular design and multiple configuration possibilities of the FANWALL systems made it possible to fit the multiple new arrays into the existing air handlers, and the easy installation process minimized downtime for the Medical Center.

Improved energy efficiency saved the hospital $103,469 in energy costs in the first year of operation, while boosting airflow capacity from 124,000 cfm to 149,000 cfm. The new fans also resulted in a measured 15 dBA noise reduction in the mechanical room. The FANWALL arrays provide a more redundant and reliable system than the old fans.

Replacing the heart of an air handling system with better fan and control technology saved a healthcare facility more than $103,469 per year. Just as importantly, it permanently resolved nagging reliability challenges. Carolinas Medical Center (CMC) in Charlotte, North Carolina, is the flagship hospital of Carolinas Healthcare System, one of the nation’s largest healthcare organizations.

Its day-surgery facility on Blythe Boulevard is a key element in the Center’s operations. The building is owned by CMC with property management by Lincoln Harris, a major property owner and manager in the Carolinas. The building was served by two penthouse air handlers, each equipped with two vaneaxial fans, one each on the supply and return air sides.

The two air handlers feed a network of variable air volume (VAV) boxes in the building. The building is connected to other facilities on the medical campus by a network of walkways and tunnels. The system design, with primary air handlers having one or two fans, was a common approach in earlier decades. Here, the air handlers were each designed to deliver 74,500 cfm of highly filtered 55° F air through the building’s ductwork, and room temperatures were regulated with the VAV boxes.

However, in this facility the air handler fans had led to problems. On several occasions, one of the fans had failed. The result had been building discomfort for several days while the fan was repaired. For a healthcare facility, this was unacceptable.

Another problem was high electric-energy expense because of fan system inefficiency, and the fact that all of the fans were required to operate even during periods of light building use and moderate outdoor temperatures. CMC looked to Lincoln Harris for resolution to both the reliability and operating cost issues.

CMC and Lincoln Harris had a long-term relationship with Thermal Resource Sales (TRS) in both Kernersville and Charlotte locations in North Carolina. They approached the firm looking for a solution. TRS is a manufacturer’s representative and also has an engineering staff experienced in HVAC problem-solving. Danny Hall from TRS was closely involved with the project from the beginning.

Hall noted, “We realized that the single vaneaxial supply and return fans had been causing CMC grief, and when the fans went down, it wasn’t a one-day fix. This created scheduling problems for them. In fact, some surgical procedures had to be rescheduled because of building climate conditions.” Hall explains that the existing system provided 124,000 cfm to the system, barely enough at peak load conditions. “And because there was only one supply fan in each penthouse, it couldn’t be shut down during light load conditions, so much of the time it operated at part-load, where fans like this are quite inefficient.”

“We could not be happier with our decision to have installed FANWALL into critical air handling units."

Transforming How They Move Air

Jeff Forman, Vice President and General Manager of Governair®, comments on this approach.  “We see increasing numbers of building owners and designers recognizing the benefits and capturing the energy savings with multiple fan arrays in air handling systems, especially in critical environmental situations.” He points out the particular value of System Optimization Controls. “With SOC we can vary the speed of fans and turn off fans when not needed, which leaves the remaining fans operating near their peak efficiencies. There are tremendous energy savings in operating this way. Each of the motors has its own variable frequency drive, so if one fan were to become disabled, the remaining fans can speed up to overcome the loss in airflow.”

The contracts for the project were let in late 2011. It was understood that the ideal time to do the air handler changeover was in the winter, when cooling requirements were lower and the four existing fan units could be taken out, one at a time. The contractor selected to execute the project was McKenney’s, Inc., a large mechanical contractor with offices in Atlanta and Charlotte.

The FANWALL units are designed to be installed in a wide variety of configurations. In the CMC building, the design called for two sets of 15 cubes in a five-wide, three-high configuration within the existing penthouse air handlers on the supply airside and two sets of 12 cubes four-wide and three-high on the return airside.

Individual cubes on the supply side are 34″ wide by 38″ high, so getting them into a tight work area is seldom a problem. According to Hall, a crane lift to the rooftop was used for speed and ease of fan and sheet metal removal. Normally the cubes are brought in through a standard doorway.

The installation work took place in January and February of 2012, at a time of year when it was practical to take the old fans out of service one at a time. The contractor took out one set of fans first, keeping the other fans operating. But the old fans were held on site in the event one of the other vaneaxial fans went down and repair crews had to scavenge parts to bring it back on line.

No changes were necessary in the coil or filter sections of the handlers. Each supply air FANWALL array produces 74,500 cfm and the return air array produces 67,650 cfm. The SOC automatically monitors and implements the most efficient mode of operation to meet airflow requirements. The motor speed can be varied along with the number of enabled fans and motors at any given point in the operating range. In this way the optimum number of fans are operating at the optimum speed for all load requirements.

In order to allow efficient shutting down of individual fan cubes, they are fitted with FANWALL Backdraft Dampers (FBD). These prevent backflow of air through the idled cube while the other cubes run. The FBD model also has a revolutionary blade profile that laminarizes incoming air and actually improves flow characteristics, resulting in a near-zero system effect.

Hall likes the fact the FANWALL units are factory built and can quite quickly be assembled into arrays and connected to power and system controls. He notes, “We had a narrow slot of time to install the units and get them operating, but we were able to achieve that easily.”

McKenney was experienced using FANWALL TECHNOLOGY products and worked closely with Hall from TRS and with Nortek Air Solutions factory personnel in planning the changeover and putting the system on line as fast as possible. Wes Dunaway, McKenney’s Senior Project Manager, Healthcare division, commented, “The design and construction team, of which TRS was an integral part, was able to achieve system performance goals, identify dimensional constraints and mitigate installation risks — minimizing impact of down time to the existing facility and controlling cost.”

One of the challenges in this changeover was maintaining correct building pressurization in the facility while running with a fan out of service. Hall says, “Once the new fan arrays were in place, this was easily achieved.”

The new fan system has now been in operation for over a year, and the results are impressive. First of all, the redundancy provided by the multiple fan units has meant that the system is totally reliable. The FANWALL units have high reliability, but even if a unit is lost, the System Optimization Controls rebalance the system and take up the slack with the remaining cubes.

Second, because the units can be modulated or taken offline to match building air demand, considerable energy is saved. Between the improved efficiency of FANWALL TECHNOLOGY units and the System Optimization Controls, savings of $103,469 has been achieved the first year according to documentation from the power supplier, Duke Energy. And finally, they were able to increase the airflow capacity of the system—from 124,000 to 149,000 cfm—within the same space as the previous fan system.

Finally, the FANWALL units are considerably quieter than the vaneaxial fans previously used. A measured reduction of 15 dBA in the mechanical room was achieved. Even in other parts of the building, Hall says, many employees have commented on how much quieter the system is today. CMC was comfortable with the FANWALL TECHNOLOGY  solution, because they had seen its effectiveness and flexibility in another building application.

Dan Maples, Chief Engineer, Lincoln Harris, added “There are so many benefits that Nortek Air Solutions and the FANWALL product bring to our operation. Obviously, they have saved Carolinas Healthcare System a lot of energy dollars. In addition to the savings, however, it’s amazing how quiet our fans are. The redundancy that we now have is an incredibly important factor as well, because we no longer have to worry about an unexpected failure causing the loss of services. All-in-all, we could not be happier with our decision to have installed FANWALL into critical air handling units.” 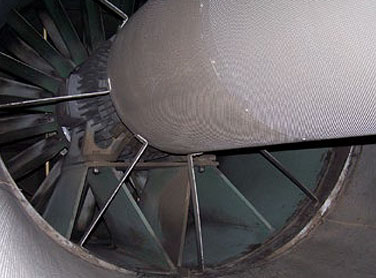 Example of an old vaneaxial fan where components like the motor are difficult to service or replace. These fans often require lengthy sound attenuators to reduce fan sound. 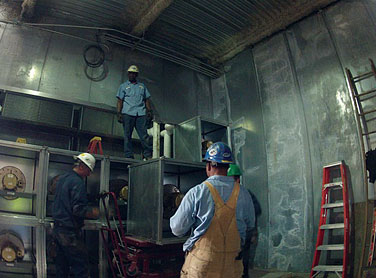 Crane and rigging personnel installing the supply 3 x 5 FANWALL array in one of the penthouses. Cubes can be configured to fit any size air tunnel and take up on average 50 percent less installation space than vaneaxial fans, without all of the sound attenuation devices. 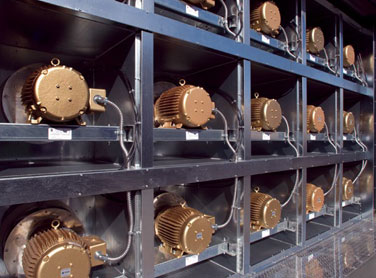 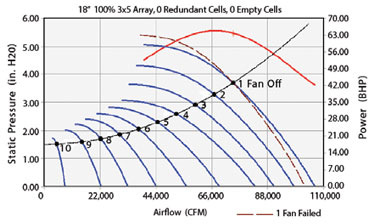 The supply FANWALL fan curve showing the number of fans operating as the airflow demand reduces. The System Optimization Controller keeps the fans operating at their peak efficiencies as the system unloads, resulting in energy savings. 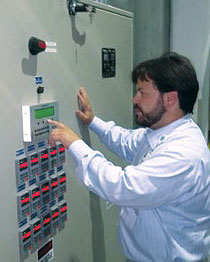 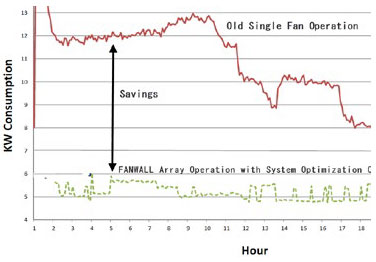