The Dell Children’s Medical Center in Austin, Texas, required an air handling solution for their 6,500 sq. ft. MRI operating suite that could meet the stringent environmental requirements for a surgical room.

In addition to the strict ventilation requirements, the air handling solution needed to meet the redundancy, reliability and acoustic standards necessary for a surgical operating room, while taking future capacity needs into account.

A Temtrol® brand Custom Air Handler with FANWALL TECHNOLOGY®, which provides built-in redundancy and quiet performance, was used to provide ventilation to the operating suite.

Unit with four direct-drive fans, each for supply and return, produces 12,000 cfm with 3,000 cfm backup capacity–enough to support the day-to-day air handling of the operating room addition and supply 100% of the area’s future needs, all housed in a compact, 31′ x 7′ x 6′ footprint.

When Dell Children’s Medical Center began the development of its new facility in Austin, Texas, the organization established a compelling vision: to heal children without harming the environment. That’s no easy task for a power-intensive industry like healthcare.

In March 2009, the U.S. Green Building Council recognized Dell Children’s Medical Center with LEED -Platinum certification, the highest of its four achievement levels for Leadership in Energy and Environmental Design. The facility is the world’s first LEED -Platinum hospital.

“There’s a definite connection between a healthy environment and improved patient outcomes,” he states. “Our vision with this new facility was to create a truly ‘green’ hospital to set new standards for our industry.”

From its location to its components, the hospital raises the bar for sustainable design and energy efficiency. The Dell Children’s facility sits on the site of the former Austin Mueller Airport, a brownfield that was painstakingly recycled and reclaimed as part of the green build process.

Unlike traditional healthcare facilities that tower many stories surrounded by concrete, Dell Children’s occupies a modest low-rise layout, with wings set up like a pinwheel. Preferential parking is reserved for carpools and hybrid vehicles. Several garden areas feature prominently, including a rooftop green area with a penthouse structure to conceal the new FANWALL air handler. The entire design creates a less intimidating approach for the young patients that Dell Children’s serves.

Dell Children’s features a variety of high-tech and green solutions, including high-efficiency fluorescent lights equipped with motion sensors, a high albedo roof to reduce the effects of the urban “heat island,” and finishes and floorings that are low in volatile organic compounds (VOCs).

Natural light penetrates more than 80% of the building’s interior. A clean-burning natural gas plant on the hospital grounds generates electricity and uses waste heat to produce chilled water and steam for the entire site and surrounding area.

When it came to air conditioning and ventilation, the Nortek Air Solutions’ Representative, Rusty Vaughn of Texas AirSystems in Dallas, assisted Dell with the initial design and implementation of the facility’s air handling system in 2007, and returned in 2009 to install FANWALL TECHNOLOGY. Texas AirSystems worked in conjunction with CCRD Partners of Dallas, the lead engineering firm, and Risner’s team at Dell to meet their air quality and efficiency objectives.

“It was critical to us to create an optimal facility that not only supported quality care, but also enhanced our surroundings,” Risner explains.

Hospitals are notorious for high-capacity energy usage. According to the U.S. Green Building Council, healthcare facilities use nearly twice as much energy per square foot as office buildings, accounting for over $3 billion annually just in electricity costs.

With its current system, however, Dell Children’s saves enough energy every day to heat and cool approximately 30 average-sized Austin homes.

“We’ve used Temtrol units from Texas AirSystems for almost 20 years, and it’s always been a positive relationship. We use Temtrol for all the hospitals we do across the United States,” says Dave Meers III, P.E., of CCRD Partners.

“Had I known more about FANWALL in 2007, I would have put one in the original operating room,” he adds. “It’s got numerous advantages.”

FANWALL’s compact design is energy-efficient and quiet, and completely reengineers how air moves. Unlike traditional air handlers that are comprised of one or two large fans, the air handler with a FANWALL array delivers airflow and meets redundancy requirements through smaller, more manageable fan arrays that fit constrained areas.

“With FANWALL, which is really a series of direct-drive fan assemblies, you can reduce the system effect and overall unit lengths,” explains Vaughn. “That allows you to reduce the physical area consumed by the unit, without sacrificing performance.”

"If you're looking for redundancy, reliability, and a great acoustic result all rolled into one, that's a FANWALL system every time."

“Chief considerations for the Dell Children’s project — and for many healthcare facilities —  were adequate redundancy for the operating rooms, acoustical performance and capacity for future expansion,” explains Meers.

“With a traditional unit, to achieve 100% redundancy requires a really big box,” he says. “With FANWALL TECHNOLOGY, because you’re using direct drive fans, you only need 25% of the size as a backup, and that takes a much smaller footprint.”

The new Dell Children’s installation serves an intra-operative MRI operating room and a diagnostic MRI room, with additional “shell” space for future needs. The current project requires approximately 9,000 cfm, enabling the hospital to easily expand without the expense of adding or replacing its air handlers.

“We have four fans, but we only need to run three at any time,” Meers says. “The advantage of multiple fans is that unlike bigger units, the FANWALL array can be sized for 100% of future capacity. We handle hospital projects all over the country, and that’s a common need.”

FANWALL’s quiet acoustical performance also supports the sensitive medical technology to be housed in the new wing, which can be disrupted by intensive vibrations. “The FANWALL is quiet — hardly noticeable,” adds Risner.

Another benefit of the air handler with a FANWALL array is reduced maintenance. Because it is comprised of an array of direct-drive assemblies, FANWALL eliminates moving parts commonly prone to repair, such as external fan shaft bearings and wear items like belts and pulleys.

“If you’re looking for redundancy, reliability and a great acoustic result all rolled into one, that’s a FANWALL system every time,” says Vaughn.

Adds Meers, “The air handler with FANWALL on this project is a fairly small unit, but it’s got all the ‘bells and whistles’: redundancy capacity, air side economizers, HEPA filtering, and UV lights in the coil section to reduce airborne bacteria. What’s really amazing is that it’s all packaged in a less than 35-foot-long unit.”

With the unit up-and-running for almost a year, Risner is satisfied with its performance. Though Dell Children’s has no immediate expansion plans, Risner says “we will definitely consider and probably specify FANWALL units” on future builds.”

Achieving LEED – Platinum certification from the U.S. Green Building Council caps a tremendous success for all involved with the Dell Children’s Medical Center project and demonstrates the potential for new construction to “build green” around the world.

“Early on, we set our sights on LEED – Platinum and measured every decision against its potential environmental impact,” states Risner.

“Everyone at Texas AirSystems and Nortek Air Solutions is grateful and pleased to be part of the team that created and delivered this solution,” states Vaughn. “It’s a credit to Dell Children’s Medical Center and the CCRD staff, who pulled the key players together to work for the best solution for a given application.”

“It’s a great fit for the facility and the environment,” he adds. 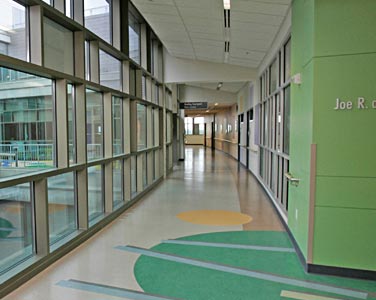 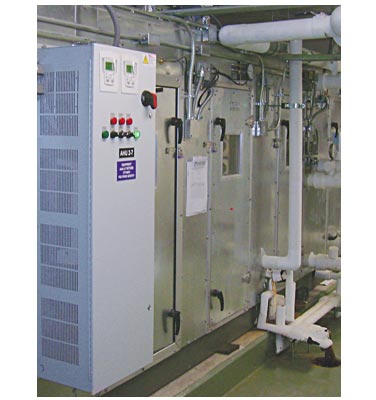 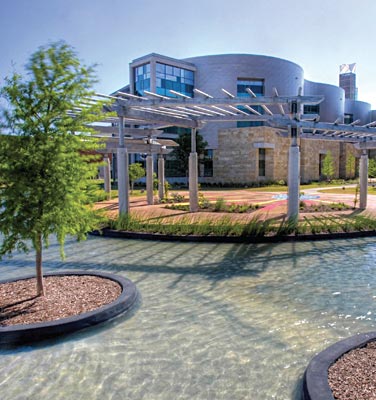 Outside view of Dell Garden. 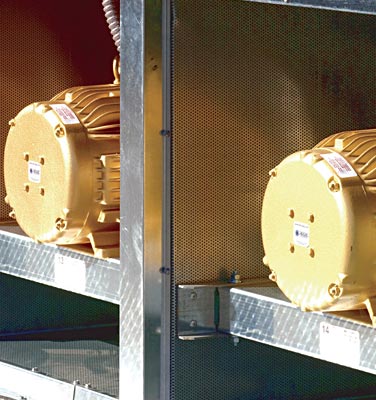 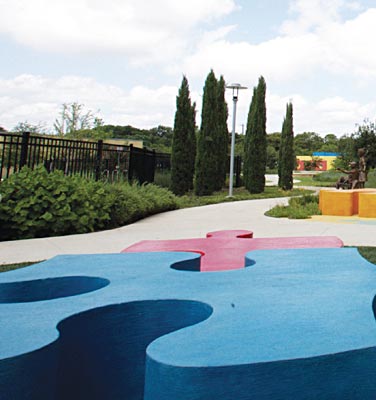 Outside bench puzzle pieces at Dell.