A new R&D center with a challenging product testing environment needed to be not only compact and reliable, but also energy efficient to contribute points to LEED® Platinum certification.

A custom air handler with a six-fan FANWALL® array helped the project team solve many challenges, including the stringent energy-efficiency requirements and the need for the air handler to have a small footprint.

Air handler installation went smoothly as the uniquely configured unit was designed to fit within a penthouse on top of the building and took up less space than a conventional air handler. FANWALL TECHNOLOGY® offered significant energy savings that contributed to the lab achieving LEED® Platinum status.

When Encore Wire, a manufacturer of copper electrical wire and cable, was ready to expand, they knew they wanted sustainability to feature prominently in the design of their new building. They also knew that requirement would pose some challenges. The new Research and Development Center, located across from the company headquarters in McKinney, Texas, was slated to house a one-floor research laboratory that would perform a variety of analytical functions, including analytical chemistry, wet chemistry, and destructive testing. The president of Encore Wire, who is a big proponent of sustainability, wanted the building to achieve LEED® Platinum status. Ultimately, the HVAC system would need to provide a significant number of points towards successfully meeting that goal.

With special considerations like sustainability, space constraints, and redundancy, a custom HVAC solution was the best option. Ron Wyman, the engineer on the project, felt confident in his recommendation to use a Temtrol® brand. “I rarely use a catalogued solution,” he says. “And I trusted the air handling unit from Temtrol. I have used so many Temtrol custom air handlers in the past, I knew I could trust them.”

The team from Temtrol was up to the challenge, providing a FANWALL system with six fans using one variable-frequency drive, and an air handling unit that utilizes an enthalpy plate energy exchanger.

“We could lose two fans and still run the building without compromising anything.”

The analytical lab, one of only three of its kind in the country, presented a unique challenge. The lab houses sophisticated equipment and is used to expose the products Encore Wire manufactures to different testing procedures — from dipping the wires in 300 gallon baths of boiling water to testing the insulation resistance, to flame chambers where the wires are rack mounted and UL tested. The HVAC system needed to be able to heat, cool, and exhaust air from these testing chambers, as well as service the office space and shared areas like the lobby and lunchroom that were also housed in the building.

The entire 13,000 sq. ft. building uses one 18,500 cfm air handler, which produces about 1.4 cfm per square foot. The labs themselves had to have 100% exhausted air, while offices and the general lab, lobby, and lunchroom use recirculated air. The building as a whole uses nearly 60% outside air, so the air handler needed to be able to respond to very low, or very high demands, depending on the weather. A condensing, air-cooled boiler, set to 130 degrees, is used to provide heating water, which provides significant energy savings, as it is able to run in condensing mode at all times. Wyman explains, “We had an owner’s performance requirement (OPR), then put the basis of design (BOD) together which included all the requirements for each space — each office/lab required a different temperature range, which we accomplished using a variable air volume (VAV) system.”

The building’s flame chamber room proved a particular challenge. An exhaust system was needed to collect all of the burnoff from the UL testing and ensure it didn’t get returned to the air handler. The flame chamber equipment required several thousand cfm of air. In addition, an abatement device was used to collect the effluent from the burn and to scrub the exhausted air. And the air handler needed to condition the space and make up for the exhausted air. Controls were installed that provided the ability to switch from “operational” flame test mode to “nonoperational” mode for use  when testing wasn’t taking place, which allowed the space to remain negatively pressurized so it wouldn’t contaminate the rest of the building.

“FANWALL TECHNOLOGY provided the necessary performance right out of the box.”

A number of requirements made FANWALL TECHNOLOGY the ideal choice for the fan solution over a conventional one–two fan air-handling unit. Redundancy was especially important because of the critical nature of the equipment housed in the lab. Tests are often run for 72–96 hours at a time, and a power shutoff during that time would be disastrous. A FANWALL system offers the benefit of using an array of fans, so if one fan fails, the rest can still operate — meaning the system has very little chance of going down. Says Wyman, “We could lose two fans and still run the building without compromising anything.”

In addition, FANWALL TECHNOLOGY provided the needed energy performance to comply with ASHRAE Standard 90.1-2007 standards, something which, at only 18,500 cfm, was a challenge. Says Wyman, “Temtrol has a good reputation of producing really great products…and FANWALL TECHNOLOGY provided the necessary performance right out of the box. Many others couldn’t get the horsepower low enough to meet the project’s requirements.” Todd Clayton, Vice President – Facilities Engineering, agrees, saying, “FANWALL is a nice technology. Its quiet and it’s efficient. It certainly does the job.”

Size was another critical concern, as the space was very tight. The air handler needed to fit within a penthouse on top of the building, which presented serious space constraints — space constraints so tight, in fact, that two doors were needed to allow access for maintenance, one on either side of the penthouse. The FANWALL system and an AHRI Certified™ enthalpy plate energy exchanger were installed in the air handling unit to pre-condition the outside air with air being exhausted out of the building. Because of its unique configuration, the FANWALL system produced a smaller footprint and took up less space than a conventional air handling unit — saving two and a half feet of space.

To maximize building energy efficiency, Encore utilized an enthalpy plate energy exchanger between the exhaust and outdoor airstreams. The airstreams do not touch and are separated by a membrane that transfers both heat and moisture between airstreams. In addition, this technology doesn’t include any moving parts, providing a significant advantage over conventional enthalpy wheel technologies. The summer/winter effectiveness ratings for the plate utilized were 73% and 80%, respectively.

Space constraints and redundancy weren’t the only challenges. With a strong commitment to sustainability, Encore Wire wanted the new research facility, located across from the headquarters, to achieve LEED® certification. Achieving LEED® Platinum status required diligently looking for points wherever possible — especially from an energy standpoint.

Says Wyman, “In trying to get to the Platinum level, we needed 20% energy savings. We worked hard to get the energies, like horsepower, down as low as we could to meet all the requirements.” The building ultimately achieved 23% energy savings, earning Encore Wire four points for LEED® Energy and Atmosphere – Credit 1. The use of FANWALL TECHNOLOGY, which provided a lower electrical connection load and low fan horsepower, provided a significant advantage in terms of energy savings. Wyman also worked towards securing the IAQ/IEQ credit for indoor air pollution reduction, submitting an impressive 57 points. In addition, the building was able to achieve 88% in water savings, in part by collecting the condensate off the air handler, utilizing a grey water system that flushed into the commodes and a cistern that watered the lawn.

The equipment was ordered before construction began and the units all arrived on time. Installation also went smoothly, taking about one–two weeks. One of the challenges encountered during installation was that the air handler had to be installed in pieces because the penthouse was already built. Ultimately, crews used the outside air opening to slide the air handler in — a challenging, yet successful maneuver. The entire construction project took ten months to complete.

Redundancy and energy efficiency were two of the most important characteristics in this unique, demanding application. With the right team, and the right products, the building was able to achieve the rare LEED® Platinum certification. Integrating multiple technologies in the building created an exciting solution. The Encore Wire project is a testament to the power of creative thinking and hard work, and the benefits advanced technologies provide. The Temtrol brand air handler combined with FANWALL TECHNOLOGY played a critical role in the success of this project. Says Rick Froebe of Texas AirSystems, “Temtrol is a great company to work with — they provide good quality, reliable equipment; they stand behind their products, and they are on the cutting edge of technology. Temtrol products really offered the perfect solution for this application.” 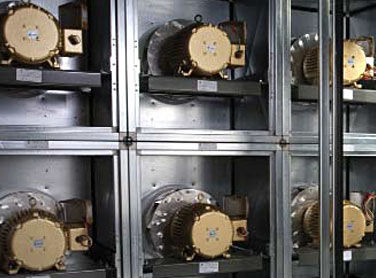 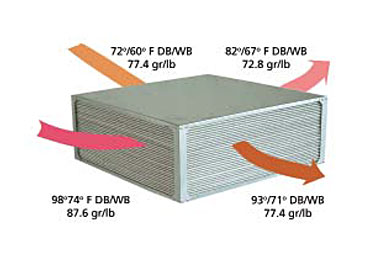 The enthalpy plate energy exchanger allows for the transfer of both heat and moisture between the exhaust and outdoor airstreams. Summer operation shown. 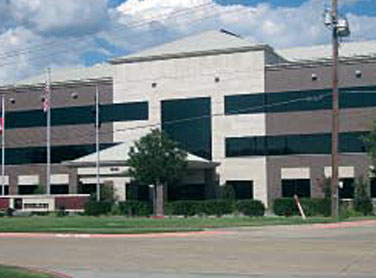 The new R&D Center is across from Encore Wire's Corporate Headquarters in McKinney, Texas. 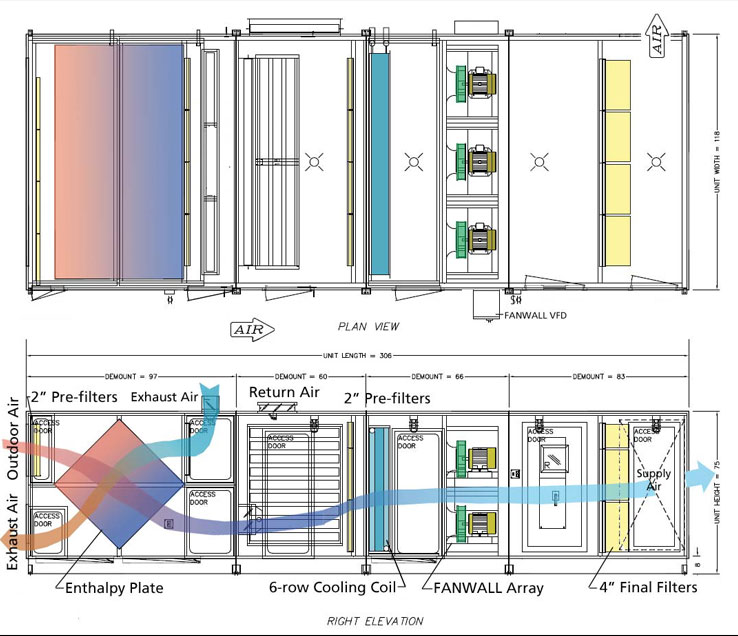 Elevation and plan views of the air handler with enthalpy plate heat exchanger and FANWALL array delivering 18,500 cfm against 5.0" TSP.