Implementing capital improvements through the most cost-efficient option.

The existing air handling unit was refurbished with a polywheel FANWALL retrofit with ECMI motors and replacement of the existing cooling and heating coils with brand new coils, thereby minimizing the impact of the much-needed capital improvements.

The Center of Student Activity

Older Equipment was Ready for Replacement

As the existing air handler was reaching the end of its operational usefulness, a decision needed to be made to either replace it and its components or continue present course with increasing instances of costly repair work due to parts failure. An increase of instances of operational failures over time would result in the reduction of the student union’s air management fulfillment; thereby drastically decreasing the amenities provided.

It was decided to refurbish the existing unit. Given that the air handler contained individual components, the possibility of refurbishing just the components rather than the entire air handling unit presented a potential option that drastically reduced costs and downtime. Additionally, component replacement also offered greater flexibility in design options.

As a world leader in replacement and retrofit applications, Nortek Air Solutions provided the best design that met the demands of the job requirements. The biggest factor was addressing the large motor replacements while also ensuring redundancy if the motors were ever to fail. Nortek Air Solutions was able to accommodate this circumstance by providing a polywheel FANWALL® system with ECMi motors to replace the two large 100 horsepower plug fans. The new FANWALL system included 27 fans total and associated speed controllers, which were able to be moved through existing doorways instead of by crane, which further reduced costs. The chilled water coil and steams coils were also replaced.

To top it all off, remote-controlled electronic type pneumatic actuators were installed and connected to the building control system. Additional isolation valves were added to the steam and chilled water coils to isolate each coil for maintenance and redundancy upon failure (should it ever occur).

Nortek Air Solutions was able to provide a retrofit integration with the existing air frame along with having the ability to match the new system to the actual capacity and airflow requirements at lower internal static pressure & sound decibels. Not only were the older fans removed, but they were replaced with the next generation of air management equipment; a polywheel FANWALL® assembly with ECMi motors. The cost-effective replacement of outdated equipment resulted in low sound levels and vibration elimination. The replacement also incorporated patented FANWALL Backdraft Dampers, HPF-P200 fan wheels and HPF-P200-ECMi fans; all intended for long-term longevity of the new air management system.

As this retrofit was conducted over holiday breaks, there was minimal downtime or disruption to building student functions. 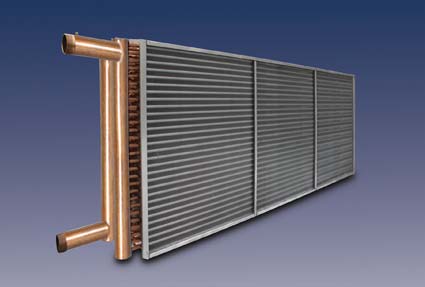 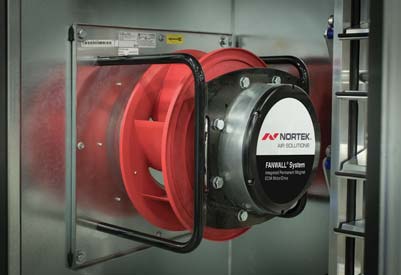