An upgrade project to improve airflow and circulation in four ballroom foyers revealed that the existing single, large, 1960s air handler was beyond its service life and needed to be replaced.

The original solution called for replacing the single air handler with four air handlers — one for each zone. However, access and budget concerns led the hotel’s chief engineer to look for a more cost effective and reliable solution.

Replace the existing fan with eight FANWALL®  fan arrays  — each two high by four wide. The FANWALL cubes in the array were small enough to be loaded onto a cart and wheeled through the 36-inch-wide mechanical room door.

The solution provides the same 48,000 cfm as the old air handler. Additionally, the new FANWALL arrays provide a much quieter system, offer increased reliability and energy efficiency, saved about 137,000 kWh of energy over the first year of operation, and resulted in a $13,000 rebate from Pacific Gas & Electric.

Known for its accommodations and hospitality, the Hilton San Francisco in Union Square also takes top marks as a venue for business gatherings. The 46-story hotel with 1,908 guest rooms was voted Best Hotel for Meetings and Best Hotel for Business Service in a 2009 survey by Executive Business magazine.

Keeping the hotel’s large meeting areas comfortable with the right blend of ventilation and conditioned air was no small matter for hotel engineering staff. Yet a recent upgrade project to improve airflow and circulation to four ballroom foyers on the second floor not only met project goals, it established a whole new paradigm for easy retrofit, energy savings, and system reliability through redundancy.

Key to the upgrade was FANWALL TECHNOLOGY from Nortek Air Solutions that solved the problem of how to deliver air to the space without incurring huge demolition costs. In addition, the retrofit reduced system effect and secured a $13,000 utility rebate for the hotel.

The catalyst for the upgrade was a single, 1960s-era, multi-zone air han­dler located deep in the twelfth-floor mechanical room. The four zones serve the pre- and post-function ballroom areas and run the perimeter of the ballrooms. The space is either unoccupied or full with as many as 1,000 guests before and after ballroom events.

The existing 47,800 cfm unit — equipped with a double-wide, doubleinlet (DWDI), constant-volume, housed fan assembly — was beyond its recommended service life and maintenance requirements were increasing. In addition, the economizer linkage and dampers were rusted. Deteriorating cooling coils and steam coils and the constant-volume control rendered the system inefficient.

“We were trying to control temperature by running steam and chilled water with one coil bank,” said Bob Woodfin, the hotel’s chief engineer. Most worrisome for Woodfin, however, was how to get the huge fan out and another one in. “There aren’t a lot of alternatives for a fan like this,” said Woodfin. “Although we were looking primarily for easy retrofit, the additional benefit of fan redundancy certainly became a significant advantage.”

Space constraints made it impractical to install a new unit the same size as the old one. Although the mechanical room is large — 24 feet high — there is little room for knockdown or staging. All new equipment had to come in through a standard, three-foot-wide door, then be moved along a narrow walkway to reach the space.

“Our original thought was to specify four small air handling units with separate controls because we needed temperature control for each zone,” said Woodfin. “This would allow us to replace the steam heat with hot water reheat to solve the problem of regulating temperature in the different zones.” However, four air handlers were still fairly large. Units would have to be either shipped in pieces to the Hilton or disassembled at the site.

“Bob Woodfin told us that he really needed to get this air handler replaced, but was looking for someone to come up with an innovative idea that could meet his budget. I knew the four-unit approach was cost prohibitive, having previously done other similar projects, so I pursued a different way to do the project.” His innovative thinking won the bid for Allied Heating and Air Conditioning.

"The FANWALL system saved about 137,000 kWh of energy over the first year compared to the old air handling system."

A few years previously, Barger had learned of a new technology that eliminated the problems associated with like-for-like replacement of DWDI housed fans — specifically, the difficulties and expense of removing the old fan and bringing in a new 2,000-lb. unit to mechanical rooms that are typically buried deep in a building. Barger was aware of FANWALL TECHNOLOGY — a modular system of small fans and motors that work together to create the same cubic feet per minute (cfm) as a single, large air handler fan — but he had never used the technology in a retrofit.

Barger met at the site with Shaun Webster, sales engineer for Norman Wright, the local manufacturers’ representative for Nortek Air Solutions. Barger’s idea was to gut the cabinet of the air handler, retain the 20’ x 10’ x 30’ chassis and build it up to meet Woodfin’s expectations as well as budget. From his experience with FANWALL TECHNOLOGY, Webster knew the idea would work.

“These systems, which are custom engineered for each project to match the exact requirements, use many small fans and motors to do the work of one large fan and motor,” said Webster. The reason is simple: if a large fan or motor like the one at the Hilton fails, the result is 100 percent failure of the air handling system. “But if there’s a failure in the array of FANWALL TECHNOLOGY fans or motors, the VFD-based system (variable frequency drive) can pick up the slack and adjust the operating speed of each cell to provide the required airflow until the failed unit can be replaced.”

A FANWALL system consists of a number of individual cube-shaped cells, each of which houses a fan, motor and electrical connections. Fan systems are custom-configured by selecting the number of fans, wheel diameter, blade width and rpm. This allows the most efficient design to be developed for each application, according to Webster. In the Hilton’s twelfth-floor mechanical room, eight FANWALL TECHNOLOGY cells (stacked two high by four wide) provide the same 48,000 cfm as the old air handler. Each 550-pound cell measures 29 inches deep, small enough to be loaded onto a cart and wheeled through the 36-inch-wide mechanical room door.

In addition to the new fan system, the retrofit design solved the steam heat issue with four-zone VAV with hot water reheat. This included running four-inch hot water piping to variable air volume controls with hot water reheat, creating a more efficient path into the chilled water coil to increase performance, and installing new copper fin, copper tube-chilled water coils, new stainless steel control dampers, and linkages for improved durability. “This proposal was a definite improvement in controlling the temperature and operating cost of the project, and Hilton awarded us the bid,” said Barger. “The FANWALL TECHNOLOGY cells made it easy to accomplish the retrofit to provide the capacity of the original design and have the ability to reduce fan energy when zones are not occupied.”

How They Did It

“I had never heard of FANWALL TECHNOLOGY, but I liked the idea that the solution would keep us within our budget,” said Brian Mork, director of property operations, Hilton San Francisco. “The labor costs for demolition and assembly we were looking at for the other alternatives would have significantly increased the cost of the project.” The entire project was completed in stages over eight days while minimizing any disruption to guests at the hotel. Installation of the FANWALL system was a fraction of that time. “We started at about 8 o’clock in the morning and finished by 10 AM,” said Josh Mauer, dryside foreman, Allied Heating and Air Conditioning.

The most time-consuming part was demolishing the eight-foot-tall fan and associated ductwork and coils. Preconstruction was a priority, and each step was scheduled to ensure all trades could complete their work to meet the timetable. “Each fitting had to be staged like a puzzle as we built ourselves out,” said Barger. The rest of the time was devoted to rigging six chilled water coils in place, connecting ducts, adding control dampers and hot water reheat coils.

FANWALL TECHNOLOGY offers many advantages over conventional air handler fans. One is in the area of maintenance. The direct-drive design requires no belts, the HVAC component most likely to fail or degrade performance over time. The new fan assembly also eliminates lubrication requirements with permanently lubricated motors and bearings.

Other key FANWALL TECHNOLOGY advantages are low vibration and quiet operation. Careful attention to balance within each of the fan wheels significantly reduces vibration and, as is the case with Hilton, eliminated the need for a concrete inertia base and spring isolation. Small fans operating at relatively high speeds produce less troublesome low-frequency sound than lower speed large fans. Noise reduction is accomplished using the patented Coplaner Silencer® of FANWALL TECHNOLOGY, which surrounds the fan and motor with sound-absorbing material to cancel noise.

“If you went into the fan room where the Hilton’s air handler was operating, it was so loud that you could barely hear yourself talk,” said Webster. “After the FANWALL system was installed, I brought all the Hilton engineers in there for training while the system was operating at 100 percent of its airflow capacity, and we were able to have a normal conversation.”

Besides being noisy, the old air handler operated at a constant speed, so output could not be adjusted to meet the actual airflow needs in the four hallways it served. The new FANWALL system combined a variable frequency drive and control system to automatically adjust fan speed, depending on the situation. For example, if just one of the hallways is occupied, the fans are slowed to deliver only the amount of airflow needed by that hallway, boosting energy efficiency.

At the Hilton San Francisco, energy efficiency was also improved by reducing “system effect.” According to Webster, this was accomplished by removing “a lot of the junk in the airstream” that was inhibiting airflow and adding to static pressure losses. For example, the old transition ductwork downstream of the fan included a restriction that was causing a large amount of static pressure loss. This section of ductwork was replaced with a new duct with a wider opening and no restrictions, improving airflow and saving energy.

All in all, FANWALL TECHNOLOGY “seemed to fit our needs better” than the four-air handler solution, said Mork. “Energy is always a big criterion for me. In all, the FANWALL system saved about 137,000 kWh of energy over the first year compared to the old air handling system.” As a result, he added, the Hilton San Francisco received a $13,000 rebate from Pacific Gas and Electric, the local utility.

The best benefit for hotel guests and staff alike is that ventilation in the ballroom foyers is now comfortable and easy to control. And for future needs, hotel engineers have a new way of approaching air handling retrofits.

For air handlers that are reaching the end of their service life, replacing existing fans and other components can be the most cost-effective solution for avoiding the cost and business disruption of an air handler failure. Access limitations, however, are a barrier to many replacements. FANWALL systems can minimize these and other barriers. 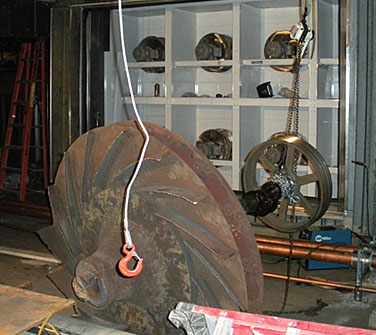 The existing air handler was beyond its recommended service life and components had deteriorated. 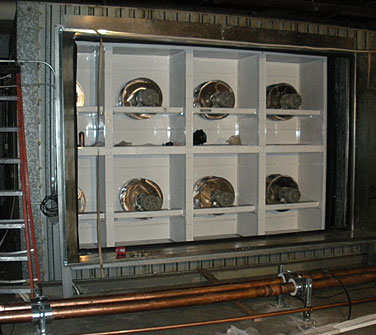 The entire project was completed in stages over eight days while minimizing disruption to guests at the hotel. Installation of the FANWALL system was a fraction of that time. “We started at about 8 o’clock in the morning and finished by 10 AM,” said Josh Mauer, dryside foreman, Allied Heating and Air Conditioning.