The Sutter Roseville Medical Center in Roseville, CA needed to eliminate the risk of a single fan failure, which could shut down the entire patient tower, by replacing an aging vaneaxial fan.

The hospital needed to maintain airflow in the building while the fan was being replaced. Additionally, hospital administration needed to reduce energy use in order to manage operating costs at the facility.

Two banks of FANWALL® fan arrays, each 5-wide by 3-high, were used to replace the single vaneaxial fan. The arrays were moved into place and installed while the original fan stayed in service, avoiding system disruption.

The new FANWALL arrays resulted in a 43% drop in energy use while delivering the same airflow as the vaneaxial fan. Additionally, the new design operates at 79% of fan capacity — compared with 98% for the old vaneaxial fan — allowing for future expansion.

It’s a hospital facility engineer’s nightmare: All of the patient rooms and many key surgical suites of a healthcare building are served by a single vaneaxial fan. That fan and its drive motor are in a penthouse structure. Consulting engineers estimate it would take up to a week or more to remove and replace them in the event of a motor failure. Such an event would shut down the medical center.

That’s what worried Rick Barney, Project Supervisor at Sutter Roseville Medical Center in Roseville, California. What happened next is a blueprint for vastly improving airside plant reliability, while keeping the required air handler in service.

The Roseville facility is a unit of the Sutter Health organization, a family of physician organizations, not­-for-­profit hospitals, and other healthcare service providers serving more than 100 communities in Northern California. The Sutter Roseville Medical Center is a modern, 350,000 sq. ft. facility that provides a wide range of medical and surgical services to the Roseville area, northeast of Sacramento. The facility has continued to grow with increasing demand for healthcare services in its region.

Much of Facility at Risk

In recent years it had become a matter of growing concern to Barney that the air-handling system that served all the patient rooms, and many of the treatment suites in the hospital, was served by a single 139,000 cfm vaneaxial fan, operating at 6.9 inches of total static pressure.

The single fan motor is rated at 250 hp and weighs 2,500 lbs. The system was installed when the medical center was built in 1996. A variable-pitch blade design allowed airflow adjustment. Barney notes that the fan and its drive motor had not yet given any problems.

However, he indicates that in the event of a fan motor failure, the medical center would need to move all of its patients, including those in critical care areas, to other facilities. “We felt this was unacceptable. We needed to eliminate this risk.” The problem, however, was that the existing fan was part of a built­up penthouse air handler. Dismantling the air handler and moving a replacement unit in could take several weeks. There wasn’t physical space for a large redundant fan and motor system. That’s when the team began considering the FANWALL concept.

Tony Burg, an Area Director for Sutter Health, and Dennis Ledbetter, Director of Plant Operations at Sutter Roseville, had seen a demonstration of the FANWALL system and were impressed. Bob Beyer of Norman S. Wright Mechanical Equipment Company also called this concept to the attention of Barney at Sutter Roseville. Barney sensed the potential of this type of system but needed ideas on how to make the conversion while maintaining airflow through the air handler. He brought this challenge to mechanical engineer Scott Karpinen at the Frank M. Booth Design Build Company of Granite Bay, near Roseville.

Karpinen was familiar with the FANWALL system but had not personally designed a project yet with this product. He recognized the special challenges on this job because of the need to maintain airflow in the building during the project. Karpinen says, “The major design challenges as we saw them were keeping the system shutdowns to an absolute minimum, relocating a major supply duct that serves the birthing center at the facility, and designing the structural base to support the FANWALL systems.”

The challenge facing engineer Barney at the facility was to eliminate the risk that went with a fan failure, which could effectively shut down the entire patient tower. With a novel design approach, this conversion was accomplished with no interruption of patient service or comfort. The innovative solution was two FANWALL multiple fan arrays that were moved into place and installed one unit at a time, while the original fan stayed in service.

The FANWALL modules, which are capable of passing through standard-width doorways, were small enough to fit into position without major building demolition. The project required construction of a platform and a reconfigured plenum and duct system so that, with quick removal of a few panels, the new system could temporarily flow air through and later around the existing vaneaxial fan until it could be removed. At a later date, the old fan was then dismantled and removed in pieces after the new fan system was online.

The system as designed included two banks of FANWALL units, each in a five­-wide ­by­ three-­high fan array configuration. “This made the most sense for the space we had to work in,” says Karpinen. The Frank M. Booth team fabricated and assembled the platform in their shop to keep field welding to a minimum. The support platform was then reassembled in place to hold the FANWALL arrays. They also performed extensive redesign of ductwork and plenum walls and planned relocation of piping to accommodate the new system.

Work on the project began in April, 2008, and was largely complete by July, though individual room air rebalancing continued for several months afterward. Barney mentions that the overall lead on the project was taken by Brad Emery of Frank M. Booth Company. Barney says, “He did a terrific job coordinating the field project.”

Barney adds that others involved in the project included Vince Clephane and the crew from Unger Construction and Tim Frees and the team from Rex Moore Electric. “It was a complex project, and timing was critical. I was very impressed how everyone worked together on this. I also need to mention Nortek Air Solutions’ design team in Portland. They were intimately involved in the design and in achieving the critical delivery dates.”

To lift the FANWALL units and other equipment to the rooftop, a crane was brought in on a single occasion. Because of their relatively small size and weight, the new units could be maneuvered easily into the penthouse. In addition to construction of the platform and assembly of the FANWALL arrays, considerable duct rearrangement was needed. A major duct serving the Labor and Delivery areas of the hospital was permanently relocated to accommodate the FANWALL arrays and still provide access through the mechanical room.

Once the platform was installed, a series fan system was developed, with the FANWALL arrays upstream of the cooling coil and the existing vaneaxial downstream. This provided continuous airflow for the facility while the new fans were installed and wired. Once the FANWALL arrays were operational, the existing fan was shut down and the facility was able to test the new fan system with the vaneaxial still in place. Once testing of the new fans was complete, the vaneaxial and custom sound traps were dismantled and removed in increments.

According to Barney, the removal of the fan and motor was then done during times when only minimal airflow was required and the crews could work within the plenum. He adds, “They did not use any cutting torches — just reciprocating saws, hacksaws, and wrenches. They took it apart one piece at a time.”

“We were able to remove the custom sound traps, operate at a higher airflow rate and static pressure, and still see a reduction of 35 hp in fan horsepower."

Barney explains that the most important benefits they see from the project are the tremendous redundancy in fan capacity and drop in energy use, but there are other benefits as well. “With the old fan, at times we were up to about 98 percent of fan capacity and had little remaining room to add to the facility. With the new design, our maximum is at about 79 percent, so we have surplus capacity without enlarging the fan room.” The new system has variable speed drives for all the fans, so the exact airflow requirement can be met.

The installed FANWALL system ties in with the building’s Siemens Talon building automation system. Barney explains, “With the arrangement of the FANWALL units, we can observe and adjust airflow patterns very closely. This helps us optimize the overall operation of the system.”

Acoustic improvement, though not a major issue because of the penthouse location, is another benefit. Barney notes that the FANWALL units are quieter, so less fan noise is transmitted downstream. “The difference is noticeable,” he says.

“We also saw a reduction in the energy requirement for the FANWALL system,” according to Karpinen. “We were able to remove the custom sound traps, operate at a higher airflow rate and static pressure, and still see a reduction of 35 hp in fan horsepower. We calculated a 43 percent savings in energy use by switching to a FANWALL array, and that was just delivering the original airflow. After ramping up to a higher airflow and operating against a higher design static pressure, the FANWALL array still requires less BHP and has a lower connected load.”

Overall, Barney says the experience Sutter Roseville Medical Center had with the project was very positive. “We worked with a team to meet a significant engineering and operational challenge and are happy with the results. We’ve also learned about the benefits of the multiple fan arrays with FANWALL and are already applying it in several other projects.” 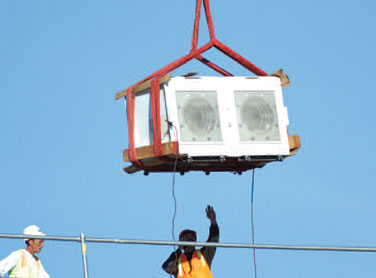 FANWALL cells are lowered by crane into the penthouse equipment room. 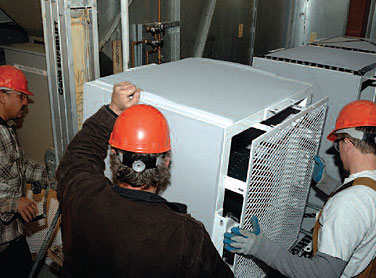 FANWALL cells are easily stacked together to form a 5 x 3 array. 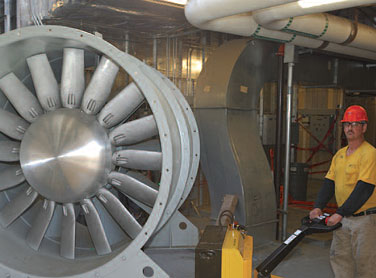 Existing 250 hp fan was a single vaneaxial type similar to the one shown here. 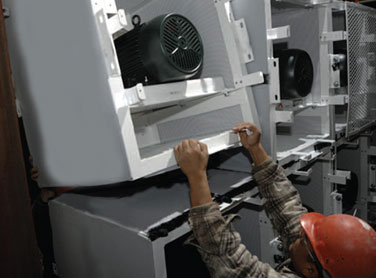 FANWALL cells stacked on one another to form an array. 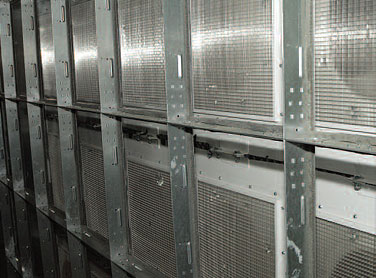 Inlet side of one 5 x 3 FANWALL array with inlet screen shown. Screen helps to reduce pre-swirl of air entering the fan and reduces sound levels. 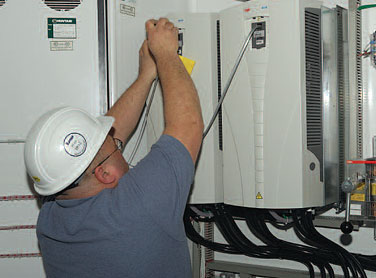 Fan speed is controlled by one variable-frequency drive with another drive for standby due to the critical nature of the application. Control panel comes prewired from the factory. 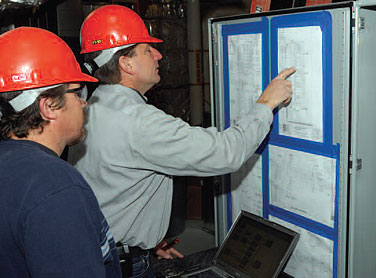 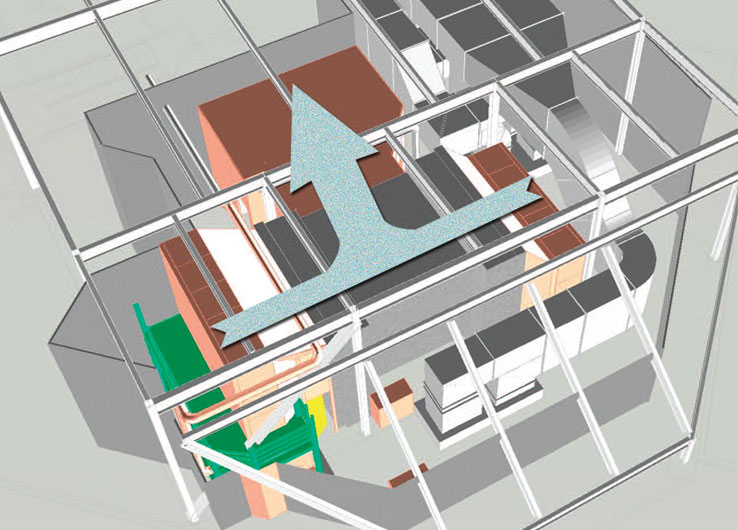 Two 69,000 cfm 5 x 3 FANWALL arrays were assembled on each side of the existing vaneaxial fan before it was removed. Each FANWALL array discharges into a common plenum that is ducted to cool or heat the building.