The remote city of Unalaska in the Aleutian Islands needed to expand its powerhouse to meet increasing electrical demands. As part of the project, new air handlers were needed to supply combustion air, cooling, ventilation, and comfort conditioning.

Unalaska is a remote location with a turbulent climate, requiring special engineering solutions. Because of space limitations in the power plant, the new air handlers needed to be outdoor units capable of withstanding winds up to 175 mph.

Nortek Air Solutions brand Governair® was chosen to design and build the modular air handlers because of its proven history of providing custom air handlers for unique applications.

Two four-level modular air handlers supplying 62,000 cfm of supply air each were delivered to the site, assembled and erected as vertical stacks. Additional steel supports, along with the rigid panel construction, helped to meet the 175 mph wind load and zone 4 seismic requirements. All internal equipment and power systems were factory-installed.

Unalaska, the 11th largest city in Alaska, is a bustling community of about 4,000 residents located on Unalaska Island in the Aleutian Chain, approximately 800 miles southwest of Anchorage.

Nothing is easy in the Aleutians. Thus a project to install necessary air handlers for a power station in Unalaska was a challenge for the engineer and the manufacturer, the Governair brand of Nortek Air Solutions.

The Aleutians separate the stormy North Pacific and the equally turbulent Bering Sea. The flavor of Unalaska has become familiar to viewers of the popular Discovery Channel program “The Deadliest Catch,” a reality TV show with a worldwide following. The section of the city known as Dutch Harbor is the home port for the now-famous crab fishing fleet that takes high risks for high rewards in the stormy northern ocean waters.

In recent years, changes in federal fishing regulations have created an extended fishing season, and the city of Unalaska has felt the effect in construction of new commercial facilities, and with that, a growth in electrical demand. To meet that need, the city made plans to purchase two 5.2 megawatt diesel units and to begin an expansion of its power house, a $48 million project. The project engineer was Electric Power Systems (EPS) of Anchorage. As part of the power plant project, EPS specified air handlers to supply the power house with combustion air, cooling, ventilation, and comfort conditioning. This element was a requirement of the generator manufacturer, the Finnish firm Wartsila.

Arrangements for the design, construction and installation of the air handlers were handled by Bob Heym of Alaska Winter Inc., a Nortek Air Solutions manufacturer’s representative in Anchorage. According to Heym, Wartsila had initially specified an indoor air handling system, but there wasn’t adequate indoor space for such a system and its associated ductwork in the new power house. Instead, Heym suggested a modular outdoor system with openings in the building wall for the required supply and exhaust ducts. He had previous experience using such systems built by Governair, a Nortek Air Solutions brand.

The project bid in late 2008 and Governair was the successful bidder. According to Application Engineer David Lunow from Governair, “Our ability to tailor a custom design suited to these extreme conditions made it an easy match.” Heym and a city representative went to the Governair factory in Oklahoma City to go over the submittals and to assure that the finished product would meet the owner’s needs. A few changes were made at this point, including the addition of a rail system in case it was ever necessary to remove the 300 lb motor. Another addition was the installation of an aluminum tread plate floor.

Late in the submittal process, it was mentioned that there was a requirement that the air handlers be able to withstand 175 mph winds. Somehow this had been missed in developing the initial spec. The levels of storm winds in the Aleutians are legendary. As recently as December, 2009, winter storm winds were officially recorded at 115 mph, and at Dutch Harbor, unofficial measurements reached 170 mph.

Coffman Engineering of Anchorage was familiar with Governair packages and was able to revise the plans to meet the changed wind speed spec. According to Lunow, “Governair replaced standard 2” X 2” corner tubes with 6” X 6” tubes, and used additional 4” X 4” tubes for cross bracing support. This kind of steel support along with the stiff Governair panel construction made it easy to meet the 175 mph wind load and zone 4 seismic requirements.” Lunow adds, “We have done vertically stacked units before this job, but nothing that had to meet such extreme requirements.”

“Given the conditions at the site and the challenge of even getting the product there, we didn’t want there to be any mistakes.” - Robert Heym, Alaska Winter Inc.

Heym and the contractor went to the Governair factory for a final walk­through and to watch the units being assembled in the factory before disassembly and shipping. Heym says, “Given the conditions at the site and the challenge even getting the product there, we didn’t want there to be any mistakes. I wanted the contractor to observe the erection process.”

After completion of the factory stage, the two units were each demounted into four stages and shipped by truck to Seattle. From there they were shipped by barge to Unalaska and trucked to the power house. The four sections are stacked vertically against the rear exterior wall of the power house. Each air handler is 20 feet wide, 12 feet deep and 40 feet high. Due to the climate conditions, there was not a need to provide either heating or cooling coils for the power house.

Lunow points out, “Governair built the two complete units with all the components mounted. We stacked the sections on top of each other to ensure everything lined up.” Each unit is able to supply 62,000 cfm of supply air, and is designed to be able to mix in return air, depending on outdoor conditions.

The units are designed in four levels. The first floor is a three-sided louvered section to provide outside air, and access to the unit. The second floor contains the filters and is the location of the control panel. The third floor has one of the exhaust fans, with its VFD. The fourth floor contains the supply fan and the second exhaust fan, along with the two fan VFDs.

The supply fan for each unit is a vertical shaft plenum fan. These were assembled along with the fan frame at Governair. This type of fan was selected because it fit the unit design and airflow requirement the best. The exhaust fans are prop fans. Governair performed the interior power wiring, with a single point power connection and a disconnect switch. At the site, the control contractor installed the control wiring.

“The City of Unalaska is pleased that Governair was able to meet the specifications required for this important project.” - Nancy Peterson, Director of Public Works, Unalaska

Nancy Peterson, Director of Public Works for the city of Unalaska states, “The City of Unalaska is pleased that Governair was able to meet the specifications required for this important project.”

The remote location and the strenuous wind and seismic requirements at Unalaska are unusual, but this project points out the importance of being able to customize packaged air handler designs to meet specific local conditions. The key to success was the combination of local knowledge and a manufacturer able to deliver a package that met those conditions. The Governair air handler package for Unalaska was just such a project. 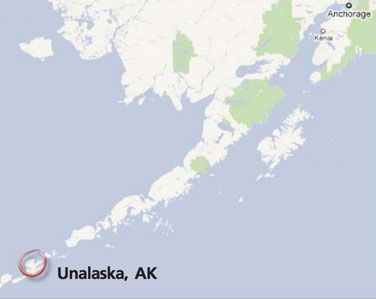 The location of Unalaska Island in the Aleutian Chain. 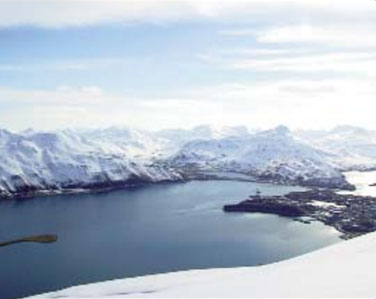 The growing need for electric power in Unalaska demanded a new power house, and with it two external air handlers to serve the building. 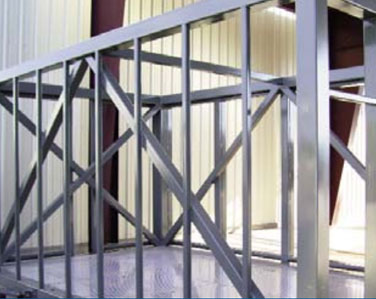 A custom steel skeleton was built by Nortek Air Solutions brand Governair for the air handlers, meeting the need to withstand winds up to 175 mph. 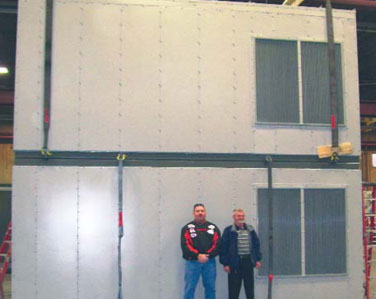 Two air handlers, each delivering 62,000 cfm, were designed to be stacked as four sections, simplifying transportation and site erection.