Like-for-like replacement air handlers or fans would be too large to fit inside the building without extensive demolition and lengthy interruption of business operations.

Six Knockdown Air Handlers utilizing modular FANWALL cubes were used, which allowed the large single fans to be replaced with a multi-fan array and the air handler to be disassembled and reassembled inside each equipment room.

The Ventrol Knockdown Air Handlers and FANWALL cubes — sized to fit through a 36-inch wide door — were carried into the building through conventional doors and installed on weekends with no disruption in service as required by the client. Benefits with the new system included lower acoustic levels, increased airflows, and improved airflow through coil and filters.

How do you get a 125-ton, 50,000 cfm air handling unit (AHU) through a 36-inch wide door? The answer, of course, is that you don’t — not without extensive demolition and lengthy interruption of business operations. That all-too-common problem was recently faced by RDK Engineers at the Marlborough, MA facility of a large commercial client. In fact, six AHUs and return fans, all located in interior mechanical rooms in the 350,000 sq. ft. building, needed to be replaced, and the work had to be completed over three-day weekends with no disruption to the client’s staff. The solution, developed by RDK’s Vinny Bettano, employed one of the first uses of innovative FANWALL TECHNOLOGY® in New England.

The single or dual fan AHUs were replaced with a custom-engineered “wall” of smaller high-efficiency fans assembled into a rectangular array. The array can contain two to 300+ direct-drive fans, all controlled by a single, variable-speed drive, that discharge into a single plenum. Because the array can be configured into virtually any arrangement, it can be designed to fit into spaces that would be impossible for traditional systems. Since the fan cubes are modular, knockdown construction is employed, and final assembly is done entirely on site, so installation in formerly-impossible locations is no longer a problem.

The FANWALL systems designed by RDK for the Marlborough project, for example, were each made of six AHUs configured with a 3×3 supply FANWALL array and six AHUs configured in a 2×2 return FANWALL array. The units were carried into the building through conventional doors and installed on weekends with no disruption in service as required by the client.

As advantageous as these benefits are, FANWALL TECHNOLOGY also delivers a number of other benefits that have generated interest from building owners, design engineers, and architects. For example, redundant fans mean increased reliability, since even if one fan fails, the rest of the system remains operational. The elimination of belts and sheaves and use of direct-drive fans with sealed bearings dramatically reduces maintenance time and expense. Expensive sound attenuation can often be eliminated because FANWALL units are significantly quieter than traditional systems. Last but not least, FANWALL arrays can save valuable facility real estate, with unit footprint reductions of 30-50%.

“People who have seen the installed system in operation have been instantly impressed with the technology’s benefits and potential.”

Originally developed for demanding, critical industrial applications like electronics cleanrooms, FANWALL TECHNOLOGY is now being used for a wide range of other facilities, including commercial buildings, hospitals, museums, and academic facilities. Since RDK’s initial use of the technology in Marlborough, the company has designed FANWALL systems for a number of additional retrofit and new construction projects, prompted by the success of the Marlborough installation and the enthusiasm of clients who have viewed it in operation.

For example, the Federal Reserve Bank of Boston (FRBB) had a custom 56,000 cfm AHU in the basement that had been assembled in place 30 years ago while the building was being constructed. The existing supply fan could no longer generate sufficient static pressure after the AHU was converted from constant to variable volume to conserve energy. Replacement with a traditional fan unit would have required prohibitively expensive demolition. Instead, RDK designed an array of ten smaller high-efficiency supply fans to replace the old fan, which was demolished. The new supply fan section was easily brought in and assembled in the basement mechanical room and delivers the performance needed by FRBB.

For new construction, the attractiveness of a FANWALL system is often based on features beyond ease of installation in tight spaces. The same client for whom RDK designed the retrofit FANWALL system in Marlborough subsequently requested that they also use the technology for a new 550,000 sq. ft. building in Smithfield, RI. The selection of FANWALL TECHNOLOGY for the cutting-edge facility, which is aiming for LEED Silver certification, was driven by the system’s ease of maintenance, energy efficiency, built-in redundancy, and ultra-quiet operation. The system is so quiet, in fact, that $350,000 in sound attenuation equipment was eliminated from the final design.

Says Rob Proctor, Nortek Air Solutions’ New England representative from Alfieri Proctor Associates, “People who have seen the installed system in operation have been instantly impressed with the technology’s benefits and potential. Right now, it’s under evaluation or in design for use at several area hospitals, laboratories and office buildings, and we expect that number to grow quickly as word gets out about the system’s advantages.” 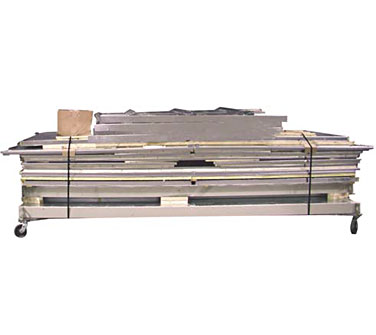 Specifying knockdown construction for the air handler with FANWALL TECHNOLOGY makes it easy to fit the pieces inside an existing building and avoid expensive demolition. Disassemble the AHU on site or have it arrive already disassembled as shown above. FANWALL cells fit through standard-width doorways. 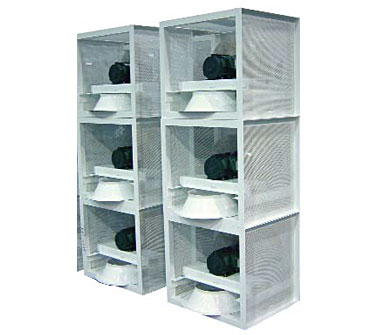