A medical, surgical, and teaching facility in Stonybrook, New York, needed to replace an aging fan system that was causing recurring maintenance problems. Any replacement system had to be built to require minimal maintenance in the future.

The hospital had a tight 3-week window to replace the existing fan system in order to avoid significant disruption to surgery patients and hospital staff.  Additionally, there was limited space in the existing mechanical room.

A custom Knockdown Air Handler with a FANWALL® fan array system replaced the existing fan system. The Knockdown Unit was designed and shipped in components, allowing each individual fan cell and unit casing to fit conveniently through the field opening for quick assembly.

The project was completed within the three-week deadline because the knockdown air handler with FANWALL array saved both time and construction costs — while delivering enhanced reliability and reduced maintenance requirements.

A medical, surgical and teaching facility to rival the best in the world! That vision was the impetus for a major Medical Center’s $300 million expansion and renovation project. What was once an ambitious goal beset by practical challenges is now a reality. Today, the Long Island, New York hospital ranks among the gold standard medical institutions in North America.

The greatly enlarged and renovated facility offers more than a visually attractive environment. It is also designed to be easy to navigate for patients, visitors, and staff. Open plan architecture with abundant natural light reflects the bright, positive attitude of caregivers. Surgeons now work in high-tech operating rooms that facilitate best-practices in modern medicine.

The Challenge of Change

The medical center currently has a total of 22 Surgery Suites. Ten were added as part of the renovation project, and the original 12 operating rooms were brought up to the highest standards of modern day efficiency.

The airside upgrade in the older OR suites is a compelling study in overcoming myriad challenges, ranging from a nearly impossible timeframe to a mechanical room with limited space. It’s the story of a retrofit job that delivered a top caliber alternative to a traditional air handling system that would have required extensive new ductwork and considerable demolition. Above all, it is a study of how a hospital got the upgrade it needed without subjecting patients and staff to lengthy disruptions in their daily routine.

By 2006, the aging fan system was causing recurring maintenance problems, even though the motor had been changed more than once. Furthermore, with no redundancy in the system, a major breakdown was becoming a real concern. In an area of a hospital dedicated specifically to surgery, a fan failure could have been a recipe for chaos. Surgical procedures might well have been interrupted for months.

On the other hand, installing a brand new single fan unit or a rooftop system would have entailed a huge investment and also caused prolonged disturbance in the Surgery Center. Relocating vulnerable patients or delaying surgeries during the lengthy installation process were unacceptable options.

The challenge was formidable — First, find the most technologically advanced air handling solution available, one with plenty of redundancy, and built to require minimal maintenance over the years. Second, get it installed and operational within a record-breaking timeframe.

“The Knockdown Air Handler with a FANWALL array can be connected to existing ductwork, making it a cost-efficient retrofit. The auxiliary components are easy to install and, once assembled, the air handler delivers maximum energy efficiency and low noise performance.”

The solution came from Long Island-based Gil-Bar Industries. The firm recommended the installation of a Knockdown Air Handler with a FANWALL array.

A FANWALL system is an array of smaller and highly efficient aluminum air foil bladed fans driven with a variable-speed drive. It delivers the required airflow in an air handler or built-up fan system. A fan array enables engineers to optimize the motor horsepower for any particular application, while reducing the overall unit length. In addition, FANWALL arrays have significantly lower operating sound power ratings versus comparable fans, which can often eliminate the need for attenuators that can increase static pressure losses and reduce efficiency.

The built-in redundancy in a FANWALL array is one of its most important features. If one fan fails, only that portion of the airflow is lost, unlike single fan systems where the entire air handler goes offline. Moreover, the loss of airflow from one fan can be offset by increasing the speed of the remaining fans.

According to Gil-Bar’s Alan Stefanac, “The Knockdown Air Handler with a FANWALL array can be connected to existing ductwork, making it a cost-efficient retrofit. The auxiliary components are easy to install and, once assembled, the air handler delivers maximum energy efficiency and low noise performance.”

Gil-Bar’s complete proposal included motors, pre and final filters, heating coils, primary and auxiliary cooling coils, humidifiers, and re-heat dehumidification coils. Once the medical center gave the “thumbs up” to the Knockdown Air Handler with a FANWALL array solution, Gil-Bar turned to Nortek Air Solutions brand Ventrol, a Montreal-based designer and manufacturer with a product offering that included a comprehensive range of air handling equipment built according to the latest industry standards.

The Knockdown Air Handler was built to meet requirements specific to the hospital. For example, the ideal temperature in an operating room is considerably lower than normal control temperatures. So the system featured two sets of coils, one for the base building system and a second set for the auxiliary chiller. This guaranteed redundancy in the chilled water system at all times.

The air handler that Ventrol custom engineered weighed 33,000 pounds, with a total of nine fans in the FANWALL array. The system was designed to operate under normal conditions with six active fans delivering a total 31,800 cfm., or 38,000 cfm with all nine fans activated.

Any buildup of surface condensation caused by a variance between ambient air and conditioned air can produce HVAC problems. Ventrol eliminated the possibility of such problems by building the air handler with hybrid foam thermal break technology consisting of fiberglass and foam with a R-18 value.

It wouldn’t have been unreasonable to allocate a couple of months to complete the multitude of tasks involved in the changeover from the old fan system to the new Knockdown Air Handler. The old fan with its motor had to be dismantled and removed from the premises. The mechanical room had to be prepared for the new installation. Then the unit had to be moved into the hospital and assembled. Last, the new system had to be connected to existing ductwork and to the electrical controls. Once all that was accomplished, the air handler had to be put online and brought up to full operational performance.

However, the installation absolutely had to be completed in a mere three weeks. That was all the time that the hospital could accept for disruptions in the Surgery Center. To further limit any inconvenience, the installation would be done over the 2008 Christmas holiday period when the surgery schedule was lighter than usual.

Making sure that everything went according to plan, and with no glitches whatsoever, key members of the project team travelled to Montreal to view the finished unit. Joining Alan Stefanac, who spearheaded the FANWALL project, were: Jerome Bobak from Cannon Design, Consulting Engineers, John Swanson, Ventrol’s representative at Cannon Design and Brian Svedberg from Best Climate Control, the mechanical contracting firm responsible for the installation of the AHU. Once inspected, the unit was knocked down and readied for shipment.

In just under the three-week deadline, the medical center had a new air handling system that met, and continues to meet, every expectation of performance.

With hospital budgets always under scrutiny, maintenance costs are an on­going concern. But maintenance is not an issue with the new air handler from Nortek Air Solutions, because the fans are direct-drive arrangements. There are no bearings to grease or belts to replace, and each fan is small enough to change without the need for costly rigging. Once a FANWALL array is installed, it runs with no special maintenance requirements.

A FANWALL array uses smaller horse­power motors than large single- or dual-fan systems. This helps the designer more closely match connected horsepower to the design horsepower. Their size also makes them more manageable to handle if service is required. Moreover, unlike large, single motor AHUs, FANWALL motors run closer to their peak efficiency at part-load conditions. Another energy saving characteristic is that one or more fans can be shut off in the array during part-load operation.

The air handlers have been up and running to the satisfaction of hospital officials. Moreover, by opting for the Knockdown Air Handler with a FANWALL array rather than a single-or dual-fan type air handler or rooftop system, the hospital saved both time and construction costs. And, what was a critical concern for the hospital and a genuine challenge for the team turned into a success story. The entire project was completed on time and on budget. 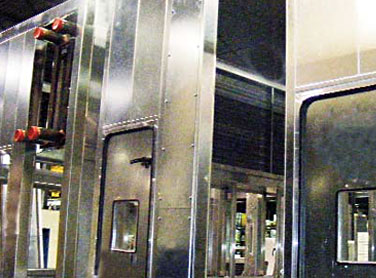 The 38,000 cfm Knockdown Air Handler is fully assembled, tested, and inspected at the factory. 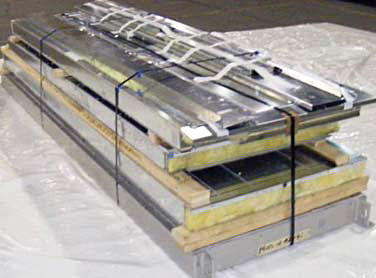 How the Knockdown Air Handler breaks down for shipment. The unit breaks down onto pallets for shipping and maneuvering into the equipment room. 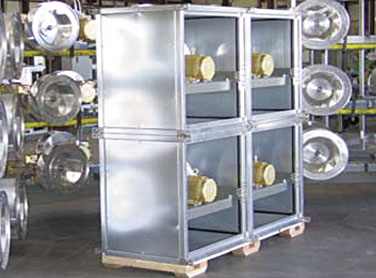 FANWALL cells ship on pallets so they can be individually moved into the building avoiding costly demolition. The motors are pre-wired at the factory for quick installation.